BlackRock, the world’s largest asset manager, is doubling down on its view that investors in the US don’t yet fully appreciate the just how disastrous an economic impact climate change could have at a time when environmental, social, and corporate governance investing is garnering mainstream attention.

“Climate-related risks already threaten portfolios today, and are set to grow, we find,” strategists at the BlackRock Investment Institute wrote in a report this week, homing in on threats the massive US municipal bond market could face as the planet warms.

“A rising share of issuance in the $3.8 trillion market is set to come from regions facing climate-related economic losses,” the strategists said of the municipal bond market’s creditworthiness.

States, cities, counties, and other government bodies issue municipal bonds — often called “munis” —  to fund projects like building schools and highways. The muni bond market works in a similar fashion to the US Treasury market in the debt instruments it offers investors, but it does so on a smaller scale. Another key difference between the two markets is the interest paid on muni bonds, which are generally exempt from federal taxes.

BlackRock estimates that within a decade more than 15% of the S&P National Municipal Bond Index by market value will come from regions in the US “suffering likely average annualized losses from climate change of up to 0.5% to 1% of GDP.”

So how did BlackRock arrive at its projections? The firm dug into data from the research provider Rhodium Group to assess the “direct” financial damage that could come from events like flooding and hurricane-level winds, along with more “indirect” damage like the impact of rising temperatures on crops and labor productivity.

Researchers at the firm highlighted expected shifts in economic activity under a “no climate action” scenario that assumes the ongoing use of fossil fuels. 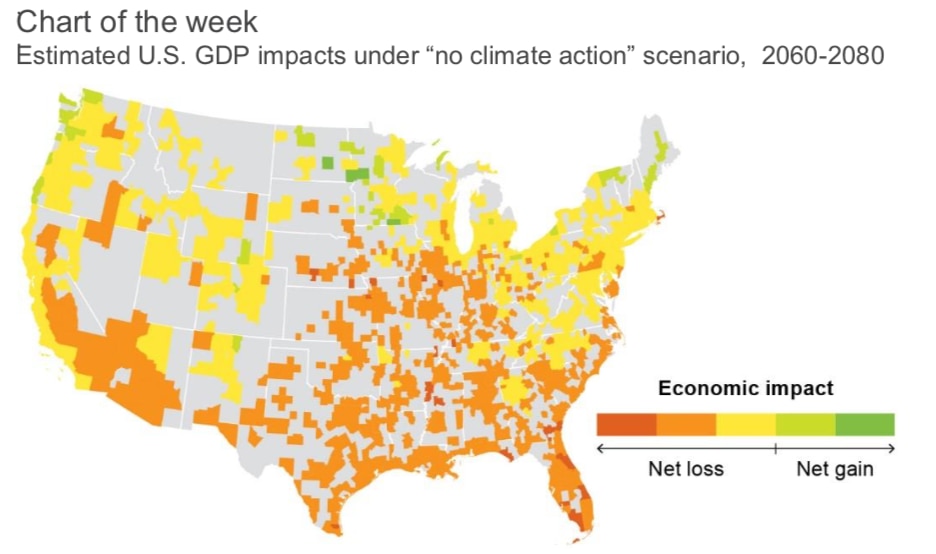 The risks across the country are asymmetric, the firm found. Under this scenario, about 58% of US metro areas would lose 1% or more of gross domestic product by 2080.

BlackRock CEO Larry Fink has in recent years come out as a proponent of corporations using a social-responsibility framework in their decisions. In Fink’s annual letter to investors released earlier this year, he called on business leaders to more actively address societal issues.

Elsewhere in the asset manager’s report out this week, the strategists added that climate change was “increasingly a risk that investors cannot afford to ignore.”

South Africa says it is…

Woman went from being homeless…

The UK could face an…