The Trump administration’s new ban against the Chinese telecommunications company Huawei could have dire implications for US technology investors, but one analyst says there’s no need to panic just yet.

The US Commerce Department said on Wednesday it added Huawei to its “Entity List” that prevents the company from purchasing American parts and components without the government’s approval first.

Of course, that could hurt the US suppliers that sell their parts to the telecom giant. The ban could also make international technology companies like Apple particularly vulnerable to retaliatory measures from China.

“A tit-for-tat fight that could be disastrous for any company that sells a lot of goods into China, especially technology-based goods, if they get banned for any reason as part of a Chinese retaliatory move,” analyst Tim Bajarin of Creative Strategies Inc. told Business Insider’s Benjamin Pimentel on Wednesday.

Still, Apple shareholders shouldn’t dump their shares because of the ban, said Wedbush analyst Dan Ives. He sees the announcement as just “noise” for now.

“While we expect a lot more sand to be thrown in the sand box between the Beltway and Shanghai until the G-20 talks in late June around these trade tensions, we caution investors on Apple to not jump to conclusions and instead rationally digest the most likely scenario when analyzing the stock,” Ives told clients in a note out Thursday.

Read more: Trump’s Huawei ban could spark a tit-for-tat fight with Beijing that puts Apple in the crossfire

At the same time, Apple was already under pressure from increased trade tensions between the US and China, Ives said. He noted the latter represents a critical “growth linchpin region,” and will make up  20% of all iPhone upgrades over the next 12 to 18 months.

“Based on our analysis the way the tariff situation stands today on some lithium batteries and other input materials the cost of making iPhones currently will go up by roughly 2%-3%,” Ives said.

“Taking a step back, we ultimately believe there is a low likelihood that Apple and its iPhones feel the brunt of the tariffs given its strategic importance domestically as well as Cook’s ability to navigate these issues in the past with Trump and K Street.”

Read more: Stocks plunge after China retaliates with duties on $60 billion of US goods

That trade spat’s slammed the US stock market earlier this week, though the major indices have recouped their losses. Apple fell to a two-month low on Monday, though it’s seen a 5%.

Despite the volatility, Ives maintains his “outperform” rating and $235 price target — 22% above where shares were trading on Thursday.

Others agree the US’s Huawei ban may not stand to impact Apple, but that it could undoubtedly hurt chipmakers with significant exposure to China.

Christopher Rolland, an analyst at the firm Susquehanna, told Markets Insider in an email that the Trump administration’s announcement doesn’t mean much for Apple. But earlier he told clients that shares in semiconductors like Skyworks and Qorvo are at risk.

“While the Huawei ban is not yet finalized and many details remain to be determined, we note increased risk and cut price targets for XLNX, SYNA, SWKS, and QRVO,” he wrote.

Apple shares rose less than 1% on Thursday, and were up 22% so far this year.

Huawei slams Trump’s ‘unreasonable’ ban, saying that the move will only harm US interests in its own 5G rollout 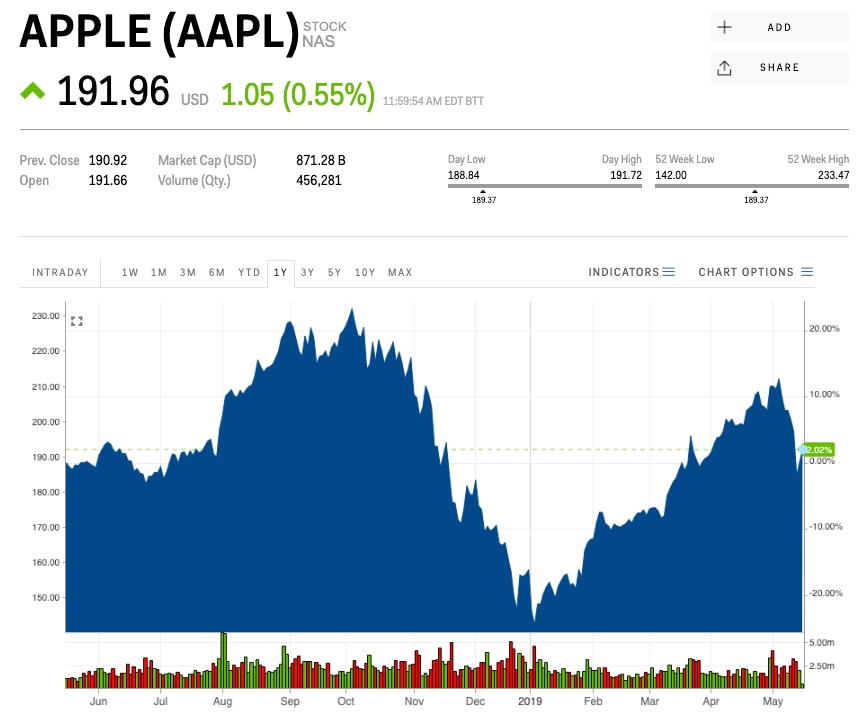