They fell to a record low, slicing beneath $5 a share — a devastating drop from its $17 initial-public-offering price. Valued at $33 billion at its 2017 IPO, Snap had dwindled to a sub-$5 billion company by the end of 2018.

But that was then.

Over the last six months, Snap shares have booked a 111% rally, trading at just over $11 apiece. The huge gains come even with Snap’s global daily-active-user growth flatlining — and dipping in North America — over the past year.

Analysts say the rally has been fueled by a mix of investors’ increasingly positive view on the Snapchat parent’s user-base size relative to Twitter, along with its young demographic that advertisers prize.

Snap said that as of last quarter, 190 million users flock to its platform each day. By comparison, Twitter reported a global daily user base of 134 million (Twitter has bemoaned comparing the metric across platforms in the past).

“Monetization is really starting to hit its stride,” John Egbert, an analyst at Stifel, told Markets Insider this week. “It takes time for advertisers to get comfortable.”

Investors have “realized the user base is big enough to support a higher level of monetization,” he said. While the app’s average revenue per user declined quarter-over-quarter, it has grown across regions in the last year. 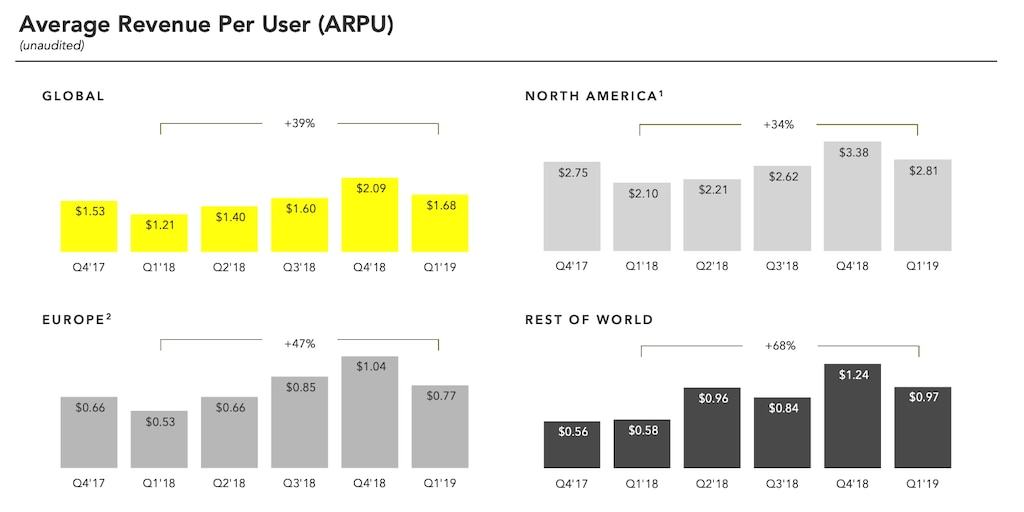 An increasingly positive tone around the company has taken hold in recent months, said Brian Wieser, the global president of business intelligence at GroupM, the parent of advertising behemoth WPP’s media agencies.

Though even with their recent surge, shares have yet to recapture their record high of $29.44 two years ago, just after its much-hyped IPO. And, to be fair, outsized moves like its recent run are more likely to hit tiny stocks like Snap’s relative to giants like Facebook.

The stock’s poor performance since going public isn’t the only thing keeping some investors on the sidelines.

Tobias Carlisle, the founder and managing director of the Los Angeles-based investment advisor Acquirers Funds, opened a short position in Snap earlier this month in a long/short equity exchange-traded fund he manages.

Carlisle is a value investor, and says he’s short other internet-focused companies like Zillow and Dropbox that have multiples too rich for the kind of value he goes after — just like Snap’s. He’s also concerned about stagnant daily-active-user growth.

Carlisle said he sees TikTok, the fast-growing social-video app, as a significant threat to Snap. TikTok was the No. 4 non-game app worldwide last year for both iOS and Android devices, per a Business Insider Intelligence analysis of Sensor Tower data.

Meanwhile, the vast majority of equity analysts covering the stock are neutral, with 26 of the 40 names who cover the stock rating it a “hold.” Some of those firms, like SunTrust, worry about a clear pathway to profitability. While Wall Street isn’t expecting the company to turn a quarterly profit this year, it sees Snap losses narrowing from adjusted $0.10 a share in the first quarter to an adjusted $0.03 a share in Q4.

Others, like Jefferies and Canaccord Genuity, believe the company’s expansion is already reflected in the stock’s price, suggesting there’s very limited upside.

Read more: Snap’s 110% moonshot this year still isn’t enough to get Wall Street rooting for it

“While Snap’s revenue performance is encouraging and we are taking a modestly more constructive view on users, we think both of these dynamics are already reflected in the stock price,” Maria Ripps, an analyst Canaccord Genuity, said in a report to clients following Snap’s first-quarter earnings last month.

In her report, Ripps highlighted one point from Snap’s quarterly results she deemed critical to its allure: Snapchat now reaches three-quarters of the 13-to-34 age group in the US, up from “over 70%” the quarter prior. That’s a wider reach than Instagram, she said, noting that’s “a key selling point for advertisers looking to attract this desirable demographic.” 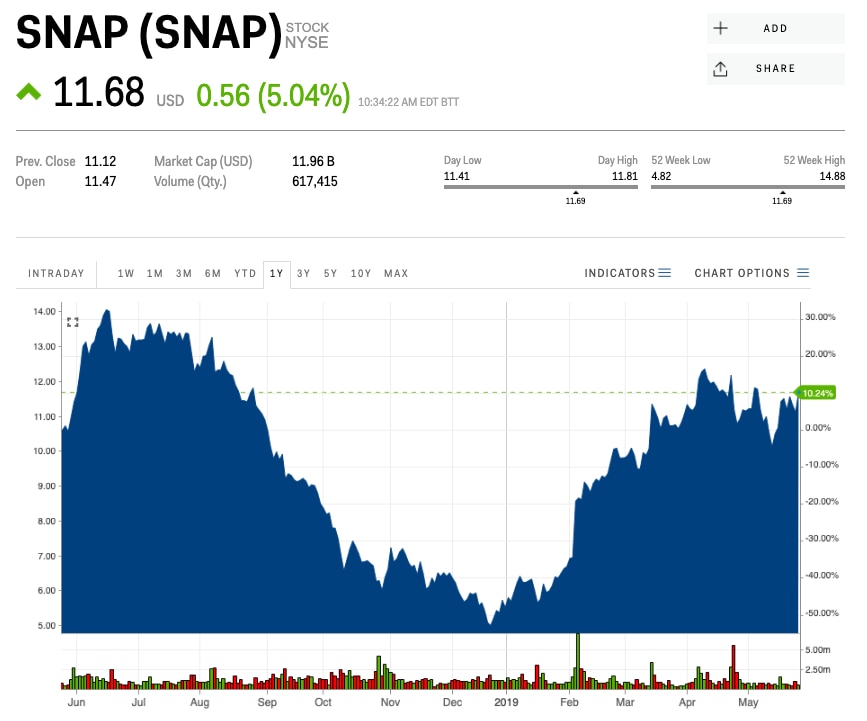