Latest News
Home /Elon Musk addressed the Tesla problem Wall Street is obsessing over, and the stock is jumping

Demand is a core theme that analysts have for months said is a major issue for the automaker, leading firms up and down Wall Street to cut their earnings estimates, price targets, and investment ratings.

“I wanted to clear, there is not a demand problem, okay? Absolutely none,” Musk said, according to a Thomson Reuters transcript.

Read more: Elon Musk just said Tesla has a good shot of setting a record for deliveries this quarter

Tesla’s stock has plunged 35% this year, setting the name up for its worst annual performance since its 2010 initial public offering.

However, shares have seen a resurgence in the last week, rallying 23% since touching a 2 1/2-year low earlier this month. The upside comes as analysts in recent weeks have grown increasingly optimistic — a departure from sentiment that hit rock bottom.

Musk, who has in the past made promises about the company that have not fully panned out, also said during the meeting it “won’t be long before we have a 400-mile range car.” As it stands, the longest-range Model S that Tesla offers can achieve 370 miles when fully charged.

He also declared that Tesla might make a move into mining. “We might get into the mining business. I don’t know,” Musk said.

Read more: Elon Musk just said Tesla might get into the mining business to make sure it can make enough batteries for future vehicles

Some analysts applauded Musk for his executive-like posture and for speaking about demand.

“Musk was calm, confident, and articulate in a way that we haven’t seen in his last several public appearances,” Gene Munster, a longtime analyst and managing partner at Loup Ventures, wrote in a note following the meeting. “He was less combative and more measured in his remarks about Tesla’s roadmap, even admitting, ‘I’m often too optimistic about time frames.'”

“In the past, when Tesla has been struggling, Musk has been visibly troubled himself, and we didn’t see that today,” Munster said, adding that while demand commentary was encouraging, “investors will continue their wait and see posture.”

Trump now says he’s the one holding up any trade deal with China, creating a ‘nightmare scenario’ for markets

A full-blown recession and double-digit stock losses: Morgan Stanley just unveiled its revised bear case for the trade war — and it’s not pretty

GOLDMAN SACHS: The music-streaming industry will nearly triple over the next 20 years. Here are the 4 dominant stocks you should buy to ride the wave. 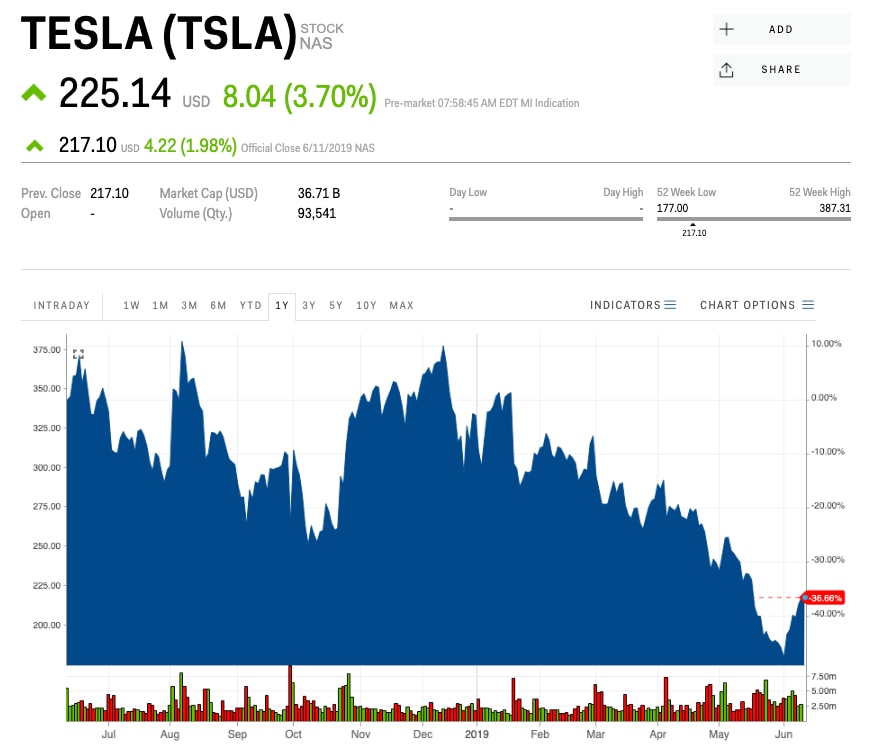