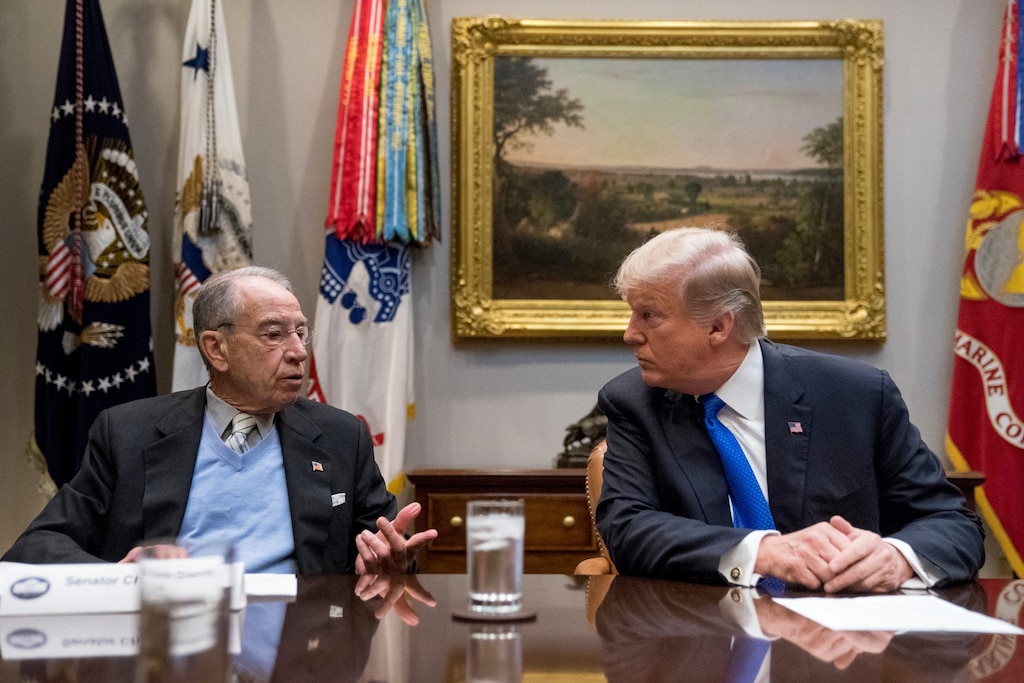 As President Donald Trump hails protectionist policies as a key way to gain leverage abroad, Republican lawmakers are moving toward legislation that would shift tariff powers to Capitol Hill.

Trump has upended a key GOP platform over the past year by igniting trade wars with multiple countries, including US allies. Now, senators appear to be closing in on a plan that seeks to limit presidential trade authority.

Sens. Pat Toomey of Pennsylvania and Rob Portman of Ohio put out competing bills this year that seek to reform Section 232 of the Trade Expansion Act, which lets the president unilaterally impose tariffs on the grounds of national security concerns. Toomey told Business Insider he hopes a markup will be ready “in the coming weeks.”

Trump was met with sharp backlash from Republican lawmakers this month after holding the threat of tariffs over Mexico until the US ally agreed to take steps to stem the flow of migrants across the southern border. The president has separately drawn criticism from his party for invoking Section 232 to impose blanket duties on steel and aluminum imports.

“Misusing this trade tool not only hurts our exports and our manufacturers, but also our consumers, and I’m hopeful the Senate Finance Committee takes action on this legislation,” said Portman.

Both Toomey’s Bicameral Congressional Trade Authority Act and Portman’s Trade Security Act have bipartisan support and seek to rein in trade powers at the White House.

Toomey’s plan is seen as the tougher of the two, requiring congressional approval for the president to declare an import a national security threat. It would also retroactively include all presidential orders up to four years prior to its passage.

Portman’s bill would add administrative steps to the Section 232 process and allow congressional committees to issue a joint resolution of disapproval to tariff actions by the president. Proponents say that approach might be less likely to face opposition, while critics argue that it lacks binding language.

“The problem is that there’s no guarantee that that bill would get time on the floor in the Senate or the House,” said a Republican aide familiar with the legislation. “The Toomey legislation guarantees a vote.”

Sen. Chuck Grassley, the chairman of the Senate Finance Committee, is leading efforts to forge a compromise on the dueling bills. In a call with reporters Tuesday, the Iowa Republican acknowledged Trump would likely not be fond of the legislation but avoided criticizing the president.

“This is not about Trump,” he said during the call, according to POLITICO. “It’s about the balancing of power.”

Economists say protectionist policies distort trade flows while acting as a tax on businesses and consumers at home. That has put some Republican lawmakers in an uncomfortable spot, especially as Trump restricts trade to address issues like immigration.

“Trump is unusual in his fondness for tariffs as a bargaining chip, and his comfort in using emergency powers to justify it,” said Donald Moynihan, the McCourt chair at the McCourt School of Public Policy at Georgetown University. “We have gotten to a point where some Republican members of the Senate have lost trust in Trump when it comes to tariffs.”

The president argues that duties will ultimately benefit Americans, making any short-term pain at home worth it. He believes reshaping trade policies will bring jobs back to the US, a signature promise of his that dates back to the 2016 campaign trail.

“The President’s tariffs have not come anywhere close to tanking this unprecedented level of economic and job growth but have instead brought our allies and adversaries to the table all for the benefit of the American worker,” White House Deputy Press Secretary Judd Deere said when asked about the Section 232 reform bills.

While Democrats tend to support a tougher stance toward perceived trade policy imbalances, there is no shortage of disagreement with the president’s approach. When asked about legislation that would limit presidential tariff authority, a spokesperson for House Speaker Nancy Pelosi referred Business Insider to a comment she had made earlier this year.

“I really haven’t seen that legislation, but I do support reclaiming some of Congress’s – it is Congress’s prerogative,” Pelosi said in February.

GOLDMAN SACHS: Buy these 17 ‘superstar’ stocks, which dominate sales in their industries and have been crushing the market