It looked like just another graduation ceremony — except it took place at the Missouri Eastern Correctional Center in the town of Pacific, where all 10 of the graduates are incarcerated.

The graduates received Associate of Arts degrees earlier this week from Washington University in St. Louis, becoming the university’s first class of incarcerated graduates. To earn the degree, the men completed 20 courses across disciplines in the humanities, social sciences, natural sciences and mathematics — all while serving time in prison.

Washington University’s Prison Education Project is just one of scores of programs across the country that grant liberal arts degrees to incarcerated or formerly incarcerated people. It’s a departure from the vocational training typically offered in prisons, which seeks to find employment for inmates in industries such as welding, plumbing and auto repair after they are released. 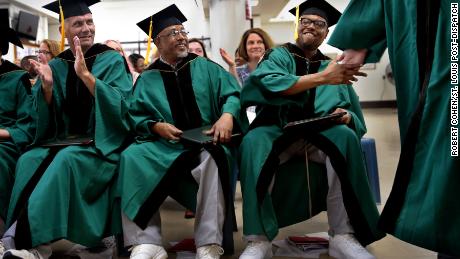 For anyone wondering what benefits learning to solve calculus problems or reading Homer’s “The Odyssey” provide to people in prison, Washington University’s graduates will tell them: It’s the critical thinking skills.

“Most people end up in prison because of bad decision-making skills,” Torey Adams, who has been in prison for nearly 13 years for robbery and armed criminal action, said.

Over time, Adams said, taking courses such as sociology and archaeology have helped him approach problems differently and have taught him to think things through before making a decision.

“You can’t quite see it when it’s happening but some way, somehow, it’s teaching you to think critically,” he said. “I see how being a Wash U student affects me in other areas of my life.”

Harvey Galler has been in and out of prison five times — currently, he’s serving a five-year sentence for statutory rape. He’s set to be released in about seven months, and he said he sees an education as the only real opportunity for him once he’s out of prison. The market for trade jobs is saturated and having a criminal record makes getting a job even harder.

“We’ve got this mark on us that other people don’t have that we’ve got to compete with, so it’s easier for them to get jobs,” he said. “If we’re able to get this leap ahead with this education, I think that carries a lot more value.”

Robert Henke, director of the school’s Prison Education Project and a professor of drama and comparative literature, said he sees a strong determination to learn in his incarcerated students. Many have ambitions of eventually earning a Bachelor of Arts degree, or continuing on to even higher education.

“There’s this kind of intensity, this sense for them that something’s really at stake,” Henke said.

It also reduces the risk of returning to prison 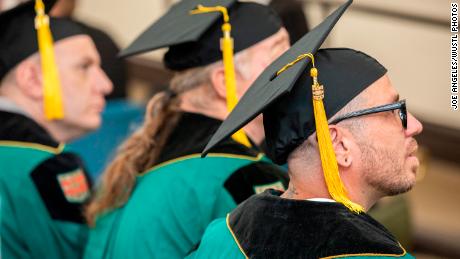 Research shows that degree-granting prison education programs have a
significant effect on reducing recidivism rates, meaning that programs like this make it less likely that former inmates will end up back in prison. And the idea has bipartisan support.

“Ensuring that people are able to participate in liberal arts programs that might empower them to be entrepreneurs or something like that as opposed to a tradesman is actually beneficial to the people themselves and society as a whole, as it helps them better find a job after prison,” Ames Grawert, senior counsel at the Brennan Center for Justice, said.

Offering people in prison an opportunity to get a liberal arts education is also humanizing, Grawert said, because it recognizes that education isn’t a “one-size-fits-all solution.”

In addition to courses in writing, math and social sciences, NYU’s program also offers electives designed to introduce inmates to certain career paths, such as social work or business. NYU’s prison education program also offers other opportunities generally available to college students, such as counseling and workshops on financial literacy and leadership development. 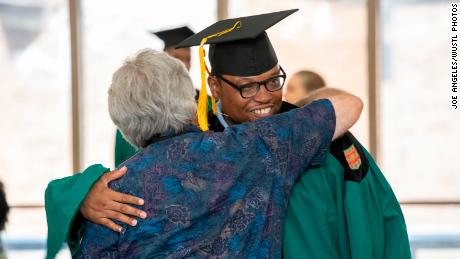 Back at Washington University, the program seems to have ignited a spark in some of its graduates. Adams said he intends to earn a Bachelor of Arts degree and eventually start his own business focusing on entertainment hospitality. Galler said that after earning a bachelor’s, he hopes to pursue a master’s in social work to be a voice that represents people who have been incarcerated.

Henke said he doesn’t see Washington University’s prison education program as a community service project. Instead, it’s “a chance to get out of the ivory tower” and find talented students in places might otherwise be neglected.

That attitude showed at the graduation ceremony, where nothing in the program indicated that the graduates were in prison. From the catered food to the leather-bound diplomas, Adams said it made the experience that much more powerful.

“They really did everything they could to make us feel like we graduated in freedom as opposed to graduating in prison,” he said.