Latest News
Home /Here is what Elizabeth Warren, Beto ORourke and others aim to do at Wednesday nights debate

Here is what each candidate aims to do going into Wednesday night’s first Democratic debate: 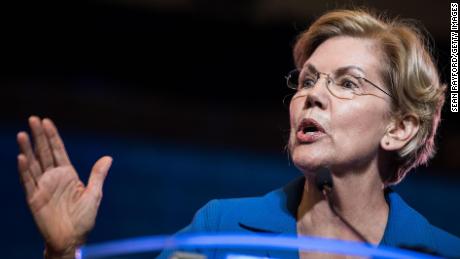 Warren’s goal is simple: Prove she is the top candidate on the stage by emphasizing not only her progressive credentials, but also the breadth of policy proposals she has rolled out in the months leading up to Wednesday night.

Warren will be the clear focal point of the debate. That could be a big opportunity for the Massachusetts Democrat — but if she falters, it could elevate her mistakes.

Warren has spent time trying to boil down, prioritize and sharpen her myriad policy proposals, aides said, mindful of the time crunch on a stage with nine other candidates. She’s also been preparing to be asked about her rivals who aren’t on stage — namely Biden and Sanders, who will appear on the second night. And Warren is also poised to defend her ideas — from Medicare for All to her signature wealth tax — from moderate candidates like Delaney who have drawn boos at liberal gatherings criticizing her plans. 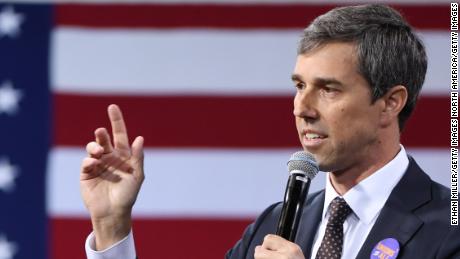 O’Rourke became a fundraising phenom in last year’s Texas Senate race in part because of his ability to turn the mundane parts of campaigning into viral moments. He was most known for a riff on civil rights in response to a town hall question about NFL players kneeling during the National Anthem — but he also once, during a debate, referenced the famous song from the early punk band The Clash by accusing Sen. Ted Cruz of “working for the Clampdown.”

O’Rourke hasn’t seen many of those viral moments as a presidential candidate yet — but to climb out of the low single digits in the polls, he could need one.

He hasn’t shown an appetite for sharply criticizing other candidates, though Biden was a rare exception after recent controversies over Biden’s views on abortion and his reference to segregationist senators. Instead, O’Rourke is likely to focus on his own bevy of policy plans, punctuated by personal anecdotes he has collected on the campaign trail. 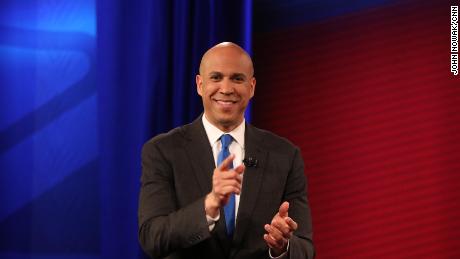 Booker comes into Wednesday night’s debate with more momentum than his campaign has experienced to date, propelled by a public spat with Biden over the former vice president’s comments about working with segregationist senators in what he described as more civil times.

Like O’Rourke, Booker benefits from the fact that four of the top five candidates landed on Thursday night, which allows him to be at the center of the stage on Wednesday, something that wouldn’t have happened on the following night.

“Our aim on a crowded stage is straightforward: Cory will look to introduce himself to the voters just tuning in to the race,” his campaign manager, Addisu Demissie, wrote in a memo about the debate.

One challenge, in the campaign’s view, has been conditioning Booker to speak in 1-minute bites to comply with the timing rules. Booker is one of the more long-winded candidates in the 2020 field. 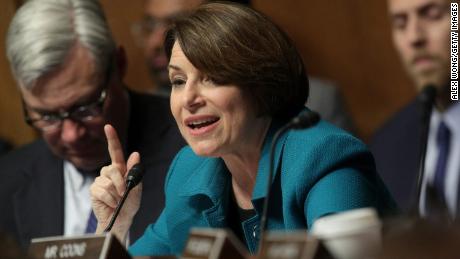 Klobuchar is getting ready for a free-for-all.

The Minnesota senator, in preparation for Wednesday night’s debate, watched video of the 2016 Republican primary debates — raucous affairs where the massive field led to free-wielding and unpredictable exchanges.

Klobuchar has yet to break out in the Democratic primary, but she told CNN earlier this month that the debates could provide break out moments, not just for her, but for all women running for president. 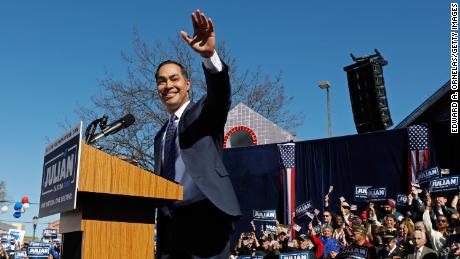 The former housing and urban development secretary has traveled the country, often to states that no other candidates have visited, spending considerable time rolling out detailed and lengthy policy proposals on a host of issues.

To date, however, it hasn’t earned him a boost beyod the 1% range, but Castro sees this debate as a chance to tell the country his story to the biggest audience he has had to date.

“My priority is to introduce myself to the American people because my name ID is lower than it is for several of the other people,” Castro told CNN.

Asked if he had any other goals, Castro laughed and said, “Oh, you know, avoid any mistakes.” 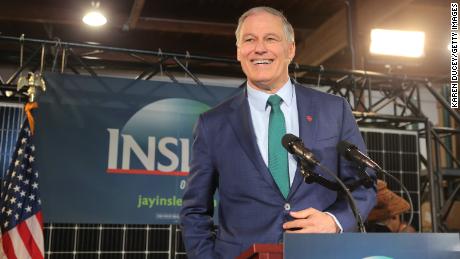 Inslee’s entire campaign has been based around one central issue: combatting the climate crisis. And Wednesday night’s debate is unlikely to look any different for the Washington governor.

Inslee heads into the contest with the most detailed and thoroughly rolled out plans to combat climate change, which means he will aim to direct the conversation — whether it is on job, foreign policy, infrastructure or just about any policy topic — to his signature issue.

And politically, this may work for the governor: Polls have consistently shown that Democratic primary voters consider combatting climate change as one of the top issues they will consider when picking a candidate. Some polls, including a CNN survey from earlier this year, found it was the top issue on the minds of voters. 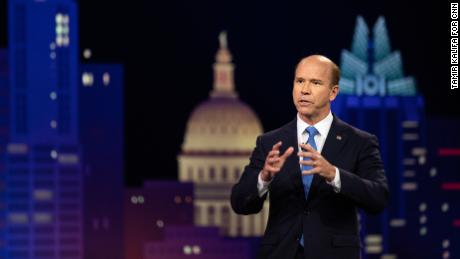 Delaney entered the 2020 race in 2017 — putting him in the race longer than anyone else — but has yet to break out of the large pack of candidates near the bottom of most polls.

In response to his position, Delaney has ratcheted up the attacks on fellow candidates — namely, Sanders, the Vermont liberal whose political views are significantly further left of Delaney’s positions.

A senior Delaney aide said Tuesday that the former congressman intends to use the opportunity to take on more progressive candidates, particularly on the issue of health care.

“We will most certainly take some time to discuss Medicare For All and its aim to make private insurance illegal,” the aide said. 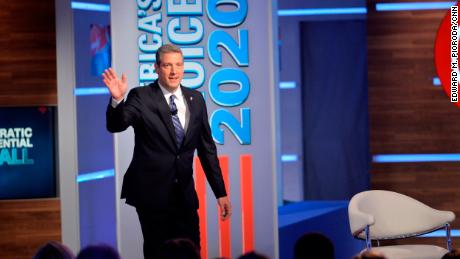 Ryan told CNN that he has one strategy going into Wednesday night’s debate: “I’ve got no real strategy other than be myself.”

Ryan, the congressman from Ohio who has made the need to appeal to white, working class voters central to his 2020 message, added that while all the candidates say they are expecting a friendly debate, he thinks that is mostly just talk.

“You could say it, but it never ends up that way, does it,” he said with a laugh. “I think people will be trying to do some contrast. … There is also not a lot of room in the Democratic Party right now for people super bashing each other. Because Trump is the main issue.” 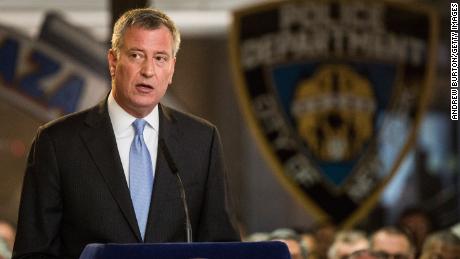 The New York Mayor is going into the first Democratic debate with a clear goal: highlight contrast.

De Blasio told CNN that he believes “every debate involves contrast” so he would “be surprised if there weren’t some differences laid out” on Wednesday night.

De Blasio has made clear he is willing to go after his opponents, too, knocking Biden’s views on abortion earlier this month. Despite Biden not being on stage with the New York Democrat, it appears like he could be invoked by the mayor.

“I think people want unity in the end. … But in the debate, you are going to draw some contrast,” de Blasio said. “And it may be a little more friendly or it may be tougher. But I would be shocked if there wasn’t some. I think it is natural.”

So, does that mean de Blasio will be swinging hard? Likely not. “The mistake in doing that is forgetting to explain to people about your own vision, what you bring,” he said. 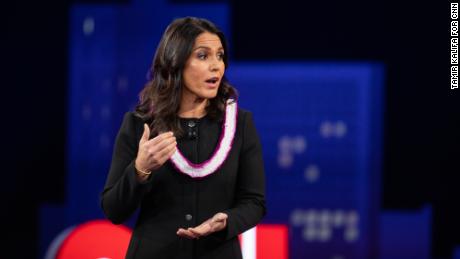 Gabbard, like others on stage on Wednesday night, has yet to have a true break out moment in the 2020 primary and risks not making the third and fourth debates without a significant boost in fundraising and polling.

But one issue that has animated Gabbard’s campaign — the call to end “endless war” — has become a near universal Democratic talking point, especially among more liberal candidates. And Gabbard, a veteran, is expected to use her time in front of the national audience to introduce herself and highlight her anti-intervention foreign policy positions to the country.