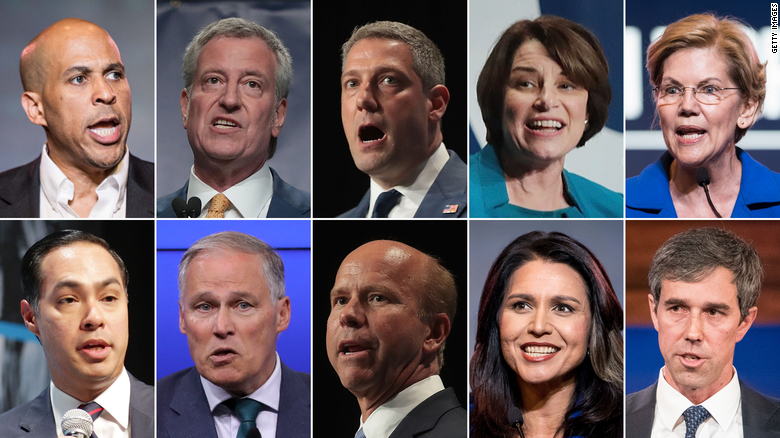 If you want to find out more about the candidates you’ll see on tonight’s debate stage, read the op-eds they have written for CNN Opinion, as the 2020 campaign has gotten underway. Take Massachusetts Sen. Elizabeth Warren, who wrote that the American economy currently isn’t working for everybody, but it could if working families were given “a higher minimum wage, strong unions [and] universal housing.”

Ohio Rep. Tim Ryan shared Warren’s sentiment and argued that he will fight for those who he contends that President Donald Trump has abandoned. Ryan believes he is best positioned to do so because unlike Trump, who he says just visits forgotten communities for rallies, Ryan actually “lives in them.”

Still, former Maryland Rep. John Delaney cautioned that any efforts to address the plight of hardworking Americans shouldn’t pivot too far to the left. “The right answer to wealth and opportunity inequality is not to reject market-based capitalism,” he reasoned, “but to make it more just and inclusive.”

Then there’s former Texas Rep. Beto O’Rourke, who argued that any conversation about our economy must pay particularly close attention to America’s farmers, hit hard by Trump’s trade wars and by massive flooding — a consequence of the looming climate crisis, he wrote.

Washington Gov. Jay Inslee also argued for attention to the climate crisis, emphasizing that to defeat its damaging effects, we must make it the “No. 1 priority” of the next administration.

Finally, Minnesota Sen. Amy Klobuchar wrote there’s still much work to be done to reform our criminal justice system. In 2018, Congress took major steps on this issue, passing the First Step Act. But, she says, we have more to do to build on “the federal reforms we made last year.”