Blitzer raised comments by the US ambassador to Israel, David Friedman, who told The New York Times this month that Israel “has the right to retain some, but unlikely all, of the West Bank,” and then asked Kushner whether the statement reflects official US policy.

“Yeah, we will be putting out our official position when we put out the peace plan,” Kushner answered, speaking on “The Situation Room.” “I think that if you go into his statement, it was, you know, in a different way. But I think we’ll see what happens over the next couple months.”

Prime Minister Benjamin Netanyahu, a Kushner family friend, raised the prospect of annexing some parts of the West Bank in the final days of Israel’s April election campaign in an effort to rally conservative voters. Asked if that move might hurt the chances of peace, Secretary of State Mike Pompeo told Jake Tapper in April, “I think that the vision that we’ll lay out is going to represent a significant change from the model that’s been used.”

Israeli settlement activity in the Palestinian territories is illegal under international law, though Israel has always sought to dispute this.

Kushner spoke to Blitzer remotely from a
conference in Bahrain, where he was presenting the economic half of the Trump administration plan to end the Israeli-Palestinian conflict. The plan envisions an estimated $50 billion investment in the Palestinian territories and surrounding countries.

The senior adviser would not directly answer questions about whether the Trump administration plan endorses a two-state solution to the conflict, deriding the concept — a core part of previous international negotiations and a central plank of the Palestinian negotiating position — as “old school vernacular.”

Kushner declined to say whether he is in contact with Palestinian officials, who have said there has been no contact for months, and would not commit US funding to the economic plan he is in Bahrain to tout. 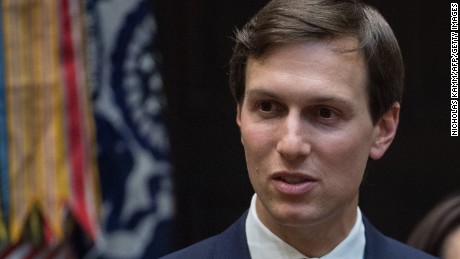 The Trump adviser offered no details about the political side of the plan, which he said runs to about 60 pages, or when it will be unveiled. And he said the economic plan could be implemented only if there is “an acceptable peace agreement.”

Palestinians
have rejected Kushner’s formula, arguing that economic measures have to be paired with a political solution. Distrust of the US runs high among Palestinian leaders, who are boycotting the conference, charging that Trump administration policies show a clear bias toward Israel.

They point to the US decision to recognize Jerusalem as Israel’s capital and move the embassy there; its closure of the Palestinian diplomatic presence in Washington and the decision to fold the separate US consular facility for Palestinians into the new embassy in Jerusalem; and the Trump administration’s decision to end aid that goes to Palestinians in the West Bank, Gaza and across the Middle East.

Blitzer asked Kushner whether “in the end,” Palestinians will have “an independent state.”

“There’s a lot of vernacular that people use that has not effectively led to a solution to the problem, so let me tell you what we do want to see,” Kushner said.

Kushner then listed “very good security” for Israelis and Palestinians, an environment “where people feel like they can live and have an opportunity … capital can come in and invest, where jobs can be created,” he said.

“We want to see an area where people can respect each other’s religions and worship freely,” Kushner said. “And we want a place where people can live with dignity and have all the opportunities that people deserve to have.” 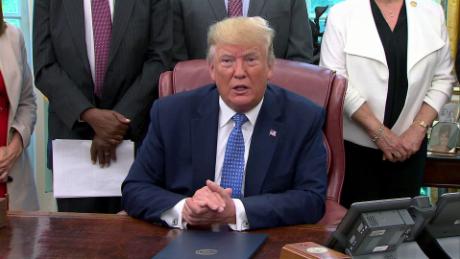 “I think that we’ll roll out our political plan that will have all the details. It’s a 60-page document at this point,” he said, adding later that it presents the “most viable, realistic option that will lead to people getting a better life.”

Asked again whether the Palestinians will have an independent state, Kushner said, “What I can say is that the plan we are putting out will dramatically improve the lives of the Palestinian people” as well as Israelis and will allow everyone “to focus on the two priorities which are the same priorities that President Trump has for America, which is: keeping everyone safe and giving everyone the opportunity to be prosperous.”

Kushner said the “major consensus” at the Bahrain conference was that the economic plan “if implemented is very doable, can work, but in order for that to happen you need the right environment,” including security and good governance.

Kushner pointed to Poland, South Korea and Japan to illustrate what he sees as possible for Palestinians.

“You look at the great examples of where they’ve been able to create economic transformation over the past 70 years. They’ve had a willing government that really had the ability to execute these plans,” he said. “It’s not easy to achieve prosperity — it’s very hard — but what we’ve done is we’ve created the framework to give them this opportunity and we’re hopeful that they’ll do the right thing.”

Kushner sidestepped a question about whether Arab states would contribute to the economic plan if it doesn’t include a two-state element and he would not commit to US funding for the plan he has helped develop. 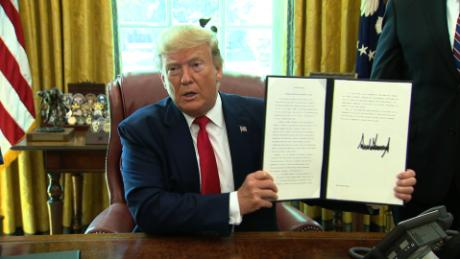 “We were big donors to the Palestinians in the past,” he told Blitzer. “We’ve stopped that since we’ve stopped communicating with them. We didn’t feel that America’s aid is an entitlement, so we’re looking at that. I do think we would be willing to be a contributor if there is a peace deal.”

Kushner was asked about contradiction between wanting to improve the economic life of Palestinians and the aid cuts to Palestinians in the West Bank for hospitals and schools, as well as to the UN agency that supports Palestinian refugees who scattered throughout the Middle East after the 1948 founding of Israel.

“When we made the move to move the embassy to Jerusalem,” “the Palestinian Authority made the decision that they did not want to engage with the administration and we said, that’s fine, but you can’t not engage with us and expect us to keep giving money,” Kushner said.

“I think it was a very rational move the President made and he said he’s open to reconsidering that at the right time, if there is progress on a peace deal,” Kushner said.