Latest News
Home /Last known images of missing Utah college student released by Salt Lake City police
In the still shots snatched from Salt Lake City International Airport videotape, Lueck is seen wearing a black backpack and carrying a stylish handbag as she exits the airport’s departure area sometime after 2 a.m. on Monday, June 17. Lueck had arrived at the airport after attending a family funeral in California. She texted her mother at 1 a.m. Monday when she landed in Salt Lake City, according to
CNN affiliate KSTU.

Another grainy photo shows her casually rolling her luggage past the baggage carousel.

That was moments before she took a Lyft to
Hatch Park in North Salt Lake City, according to police. The Lyft driver drove off and picked up other riders. Lueck has not been seen or heard from since.

“Mackenzie was met at Hatch Park by an individual in a vehicle. The Lyft driver left Mackenzie at the park with that person and stated that Mackenzie did not appear to be in any type of distress,” Salt Lake Assistant Police Chief Tim Doubt told reporters on Monday. Police cannot confirm the make or model of the car and do not know the identity of the person Lueck met — or even if that person is a man or a woman, Doubt said.

Lyft itself confirmed her route showed no irregularities and ended at the destination she entered. The driver continued providing rides immediately after the ride ended, the company said. “We are actively assisting law enforcement with their investigation,” Lyft stated on Saturday.

Lueck missed a flight to Los Angeles on the morning of June 23 and she also missed a midterm exam, according to police.

Friend and sorority sister Ashley Fine told
CNN affiliate KSL that Lueck is “extremely dedicated. She would never miss her midterms or anything like that.”

Fine said Lueck lives with roommates near Trolley Square but noted that she has not been in touch with them. “I don’t know why she would be going (to North Salt Lake) around 2 a.m. It’s just very, very suspicious and dangerous,” Fine said. 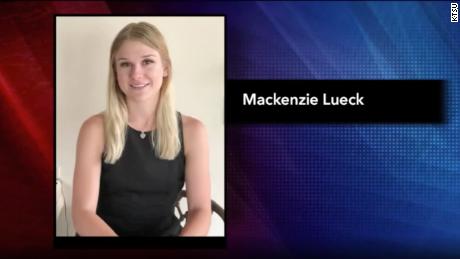 Lueck’s phone has not been on or located since June 17, police said. While no evidence of harm has been found, Doubt said “because of the circumstances of the case, we want to make sure that she is all right.”

“Mackenzie, we are asking you to please reach out to either the Salt Lake City police department or a law enforcement agency where you are at. We want to make sure you are safe and we will respect your wishes,” said Doubt, who noted that sometimes missing people don’t want to be reached.