Latest News
Home /Morgan Stanley: The S&P 500 will fail to break out for a third time in 18 months

Traders Gregory Rowe (R) and Peter Tuchman work on the floor of the New York Stock Exchange (NYSE) ahead of the closing bell, June 21, 2019 in New York City.

The third time is “not the charm” for an S&P 500 breakout, according to Morgan Stanley.

Despite the S&P 500 closing at an all-time high Friday, the index’s internals and fundamentals are too weak to maintain the rally, the firm said. 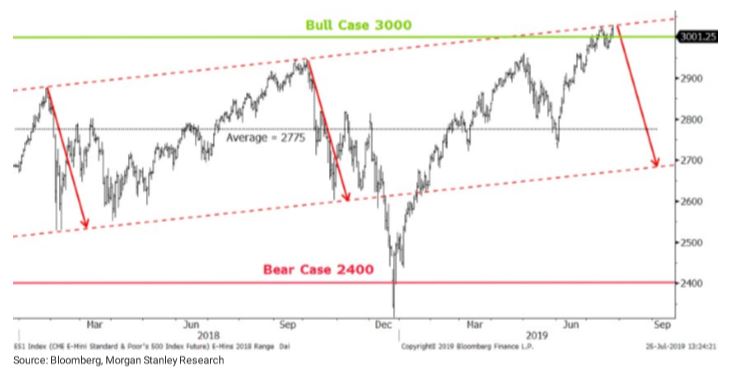 “While our 2400–3000 call from 18 months ago may look vulnerable, we think this latest surge will fail again, as we don’t expect a Fed cut to rekindle growth the way market participants may be hoping, and now pricing,” said Mike Wilson, Morgan Stanley’s chief U.S. equity strategist and chief investment officer, in a note to clients Monday.

In the last 18 months, the S&P 500 has peaked close to or just above the 3,000 range three times. The last two times were followed by a market correction and this time is no different, according to Wilson. While The Federal Reserve is likely to cut interest rates by 25 basis points Wednesday, the boost from the easing will not sustain the breakout that many investors are expecting, he said.

A growth slowdown fueled by a trade war between the U.S and China and the Fed’s policy pivot have caused interest rates to fall. This low-rate environment has made equities appear attractive when they are not, preventing a larger expansion, said Wilson.

Wilson also raised a red flag that earnings forecasts have fallen since the start of the year.

“We remain of the view that the consensus S&P 500 earnings forecasts are still materially too high for both the second half of 2019 and 2020 and think the Fed’s expected rate cut next week should not be celebrated if it is accompanied by an earnings and possibly economic recession,” he said.

— with reporting from CNBC’s Michael Bloom.