Latest News
Home /The stock market could be in for a VIXplosion, says widely followed strategist Sven Henrich

We could be headed for a VIXplosion.

The CBOE Volatility Index, known commonly as the VIX or the stock market’s fear gauge, has been sitting at relatively low levels as stocks reach all-time highs.

And while muted market fears might seem advantageous for now, the VIX could effectively be a ticking time bomb, says Sven Henrich, founder and lead market strategist at NorthmanTrader.

“The VIX follows some very specific patterns that show compression,” Henrich said Friday on CNBC’s “Trading Nation.” “If you look back to, let’s say, the last few years, we’ve seen a large compression pattern from 2016 to 2017.” 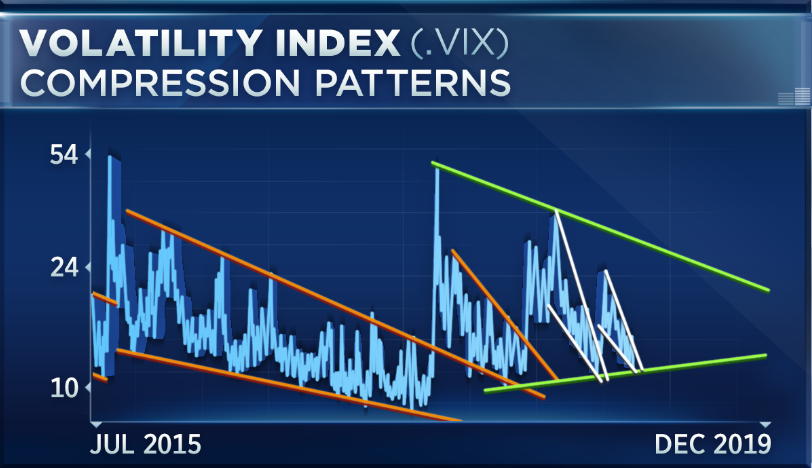 That compression — demonstrated by a series of lower highs and lower lows in the VIX made over time — builds up what Henrich referred to as “energy” that could soon result in an all-out burst.

“When that energy compresses too much, then we see these spikes,” the strategist said. “We have seen these spikes with quite a bit of regularity, but they always need some sort of trigger, and perhaps the Fed may be the trigger next week.”

And, with the month of August approaching — which typically sees the lowest trading volumes of the year — investors simply may not be prepared for the swings that could occur.

“[I] see a lot of complacency right now,” Henrich said. “This week we had news of antitrust investigations for Nasdaq. What’d the Nasdaq do? Made new all-time highs. It’s not pricing in any bad news whatsoever.”

And, as the VIX forms a narrower wedge pattern, it looks like it’s increasingly primed for another pop to the upside, he said. 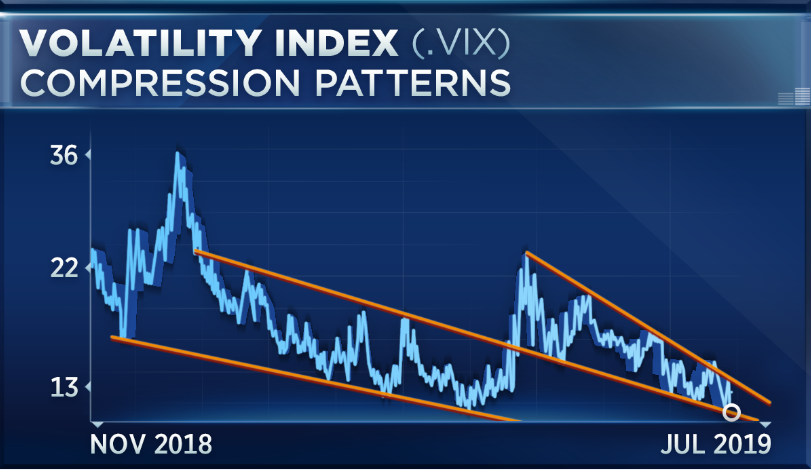 “It’s compressing tighter and tighter, and it’s building up this pattern,” Henrich said. “So, it’s ready for another breakout. The question is the when and the how.”

Factor in a gap that the VIX needs to fill between the 24 and 25 levels, made in January during Federal Reserve Chair Jay Powell’s speech about being “patient” with monetary policy, and a number of similar gaps on the downside in the S&P 500, and the risks are clearly building, Henrich warned.

“Let me add one additional point, very important: from a Nasdaq perspective, while we see the Nasdaq making new highs, there’s no visible expansion in new highs versus new lows in these indicators, ” he said. “It’s very much flatlined. So, again, we’re seeing participation waning in favor of a few individual stocks on the Nasdaq.”

The VIX tracks option prices to measure near-term expectations of volatility, or the odds that the stock market will endure bigger swings in the near future. When the VIX rises, it tends to mean investors are growing concerned about the market and making bets to protect themselves.

The fear gauge dropped by nearly 5% in Friday trading, settling at just over 12.