Traders and financial professionals work on the floor of the New York Stock Exchange.

An “insurance” rate cut seems like a done deal to traders this week, soon to mark the first reduction since the financial crisis by the Federal Reserve.

For investors looking to play the anticipated cut, here are the sectors that have done well in the past when the Fed embarked on easing cycles.

Materials and industrials both returned nearly 9% on average in the six months after the initial rate cut as cyclical sectors tend to react quickly to lower rates and expectations for them to jolt the economy. It’s also no surprise that the consumer sector did well as lower borrowing costs spur spending. Both consumer discretionary and staples rose more than 7% after the Fed trimmed rates.

The overall market climbs just over 4%, on average, in the six months after an initial cut. 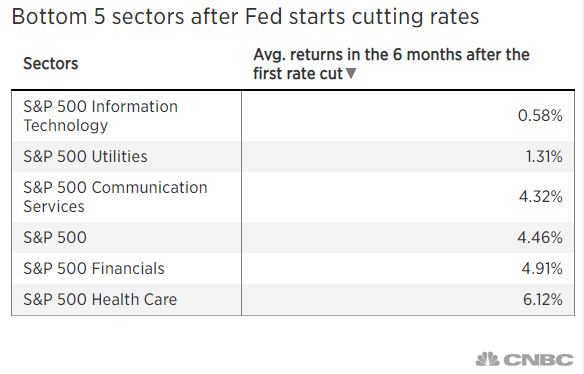 Tech is one sector to avoid after a Fed rate reduction if history is any guide. The S&P 500 information technology sector has been flat even when the central bank embraced easy money. Noncyclical utilities didn’t get much of a lift from the past rate cuts. Communication services, health care and financials are also among the worst-performing sectors.

The Fed will announce its latest decision on whether to adjust interest rates at 2 p.m. ET Wednesday. Despite a low unemployment rate and 2% GDP growth, investors widely expect the central bank to cut its benchmark lending rate for the first time since 2008, when the Fed slashed interest rates to virtually zero as a result of the Great Recession.