A UPS driver loads packages to be delivered onto a dolly from a United Parcel Service (UPS) all-electric vehicle in Sacramento, California, U.S.,

Stifel has downgraded UPS stock, which has been on a strong move upward after better-than-expected earnings.

The firm downgraded the stock to hold from buy and maintained its $118 per share price target, saying it does not feel comfortable pushing the valuation multiple up high enough to maintain its buy rating.

“Given the company spoke on its earnings call of a challenging macro environment heading into year-end and that we believe its long-term initiatives will likely require extra investment in 2020 that could limit margin expansion and earnings growth next year, we are stepping to the sidelines with respect to the stock,” Stifel’s David Ross said in a note to client on Sunday.

Shares of the world’s largest package delivery company soared more than 9% last week after UPS reported better-than-expected second-quarter earnings, driven by high demand for Next Day Air. UPS has been investing billions of dollars to make a faster and more efficient network. Ross said although the investments working well for the company and the stock, the spending will prevent margins from expanding in the near-term.

Shares of UPS fell more than 1% in premarket trading on Monday. 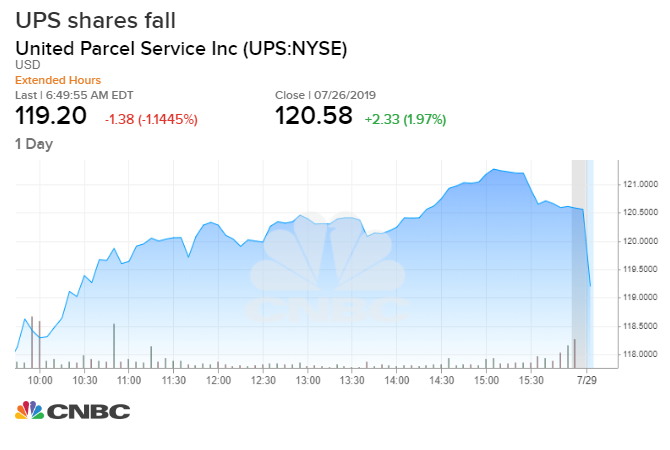 Ross said fears about e-commerce giant Amazon are “somewhat overblown” because Amazon seems to be adding to the network density for UPS. However, Ross said this could change.

“Over time, the picture will change and Amazon could become more of a competitor than a customer, but for the next couple years at least, we see UPS helping Amazon more than pushing them away,” said Ross.

Shares of UPS are up more than 23% this year.

— with reporting from CNBC’s Michael Bloom