Latest News
Home /A US-based cannabis company could be active in as little as 6 months, says pot investor

The pot proliferation is on.

Cannabis-themed exchange-traded funds are some of the most popular in the ETF space, with the ETFMG Alternative Harvest ETF (MJ) and the AdvisorShares Pure Cannabis ETF (YOLO) quickly attracting millions of dollars in investment and consistently topping Google Trends as the most-searched topics in ETF-related searches.

But these funds are about to get an even bigger boost, says Tim Seymour, founder and chief investment officer at Seymour Asset Management and now portfolio manager of the group’s newest entrant, launched on July 23: the Amplify Seymour Cannabis ETF (CNBS).

As federal lawmakers increasingly look at the cannabis space, doing business in the United States as a cannabis company is on the cusp of getting a lot easier, Seymour said Monday on CNBC’s “ETF Edge.”

“Ultimately, what’s happening is U.S. companies are working at a disadvantage to their global peers, certainly their Canadian ones,” because of restrictions around entering the banking system when selling or handling a federally illegal product, Seymour said.

But with the Senate Banking Committee now concentrated on this issue after hosting hearings around the challenges last week, it’s all about to change, and that could happen soon, Seymour said.

In fact, a U.S.-based cannabis company dealing in both THC- and CBD-based products could be active “within six months” thanks to the STATES Act and the SAFE Act, two bills seeking to loosen federal and financial regulations around state-approved marijuana operators, Seymour said. (THC is the plant’s psychoactive ingredient and CBD is its non-psychoactive component.)

“Until that’s there, … though, I’m not going to invest in companies that my investors are concerned about,” he said.

Instead, Seymour is investing in what he sees as pure-play cannabis companies that fall into three distinct buckets: firms that deal with the product itself; firms tied to the cannabis industry via the infrastructure, such as REITs and financial-service players; and firms that make technology for consumption and agriculture.

“What’s so exciting about this sector right now is all of these verticals are shaping up at a time where an industry’s coming out of prohibition,” he said. 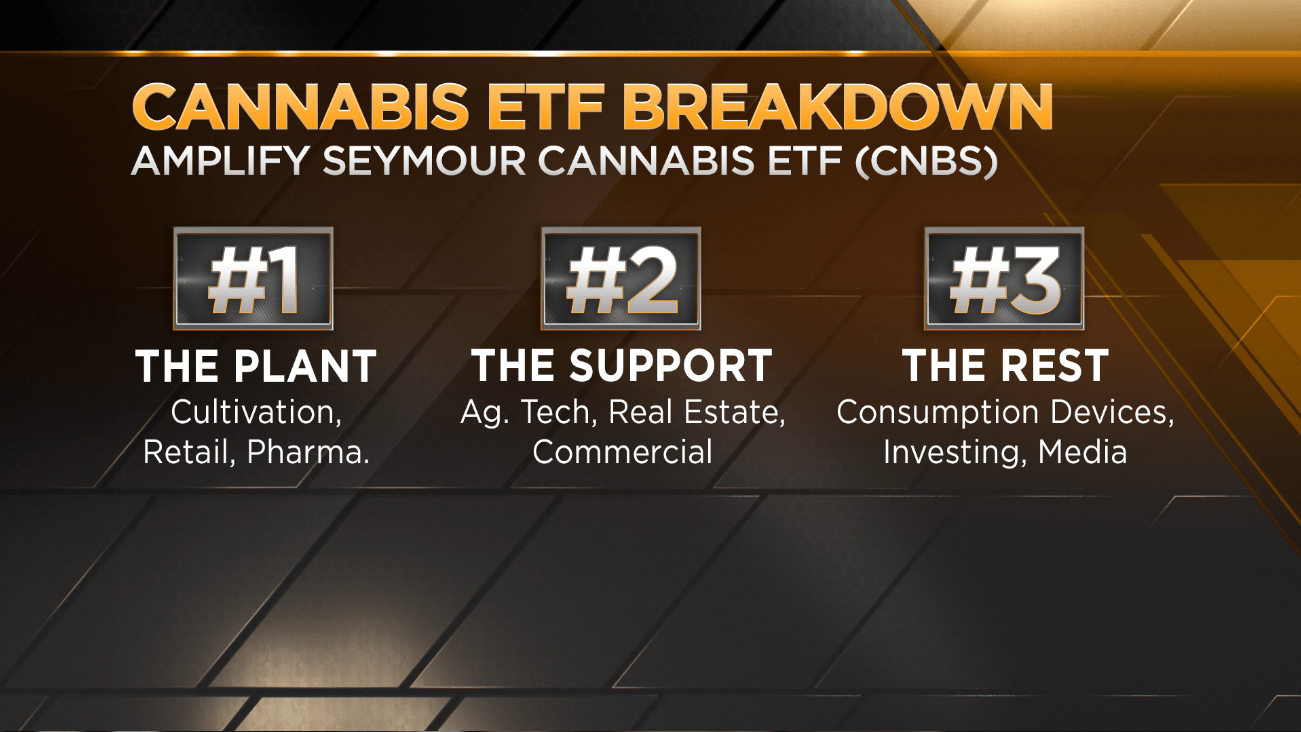 “We want to have exposure to companies that are not only the most thoughtful portfolio today, but I’m out there looking and scouring the leading edge of what’s supposed to be in that portfolio tomorrow,” Seymour said.

Eighty percent of the fund’s 29 holdings — which include popular names like Aurora Cannabis and Canopy Growth Corp. — get 50% or more of their revenues from the cannabis industry, a strategy that makes it one of the purest in the space, according to Seymour.

“Let’s cut right to it: You need to understand what you’re investing in,” Seymour said of the sector. “You need to understand: Is this a pure play on the sector? So, 80% of our portfolio has to be companies that have more than 50% of their revenues from cannabis. If you look at other ETFs in the space, they’re not that pure.”

Todd Rosenbluth, senior director of ETF and mutual fund research at CFRA, echoed how important it was for investors to know what they’re buying when it comes to cannabis ETFs.

“There’s five of these ETFs that are out there, and Tim’s fund is actively managed. It invests in Canada. There’s MJ, … which is index-based. You’ve got a fund that is investing in the U.S. using derivatives,” he said in the same “ETF Edge” interview. “So, it is important, if you are taking a look at this space, to understand what’s inside the portfolio [and] what is not inside the portfolio.”

CNBS fell more than 1% on Monday and is down more than 3% since its launch last week. MJ lost nearly 2% in Monday trading but is up nearly 13% this year. YOLO, which launched in mid-April, shed less than 1% Monday, but is down almost 20% since its inception.

Disclosure: Tim Seymour is the portfolio manager of the Amplify Seymour Cannabis ETF (CNBS) and is on the advisory board of The Green Organic Dutchman, Heaven, KushCo Holdings, Dionymed, Tikun Olam, CCTV, and Canndescent. Stocks in CNBS must be legal in the countries in which they operate. All of the ETF’s holdings are listed here.