Beyond Meat shareholders have enjoyed a historic run since the fake meat company’s IPO in May, with the stock gaining 800% through Monday’s close. Now some insiders are getting the opportunity to pocket some gains at a historically fast clip.

Along with its second earnings report as a public company, Beyond Meat said on Monday that it’s holding a secondary share sale, enabling early investors like Kleiner Perkins and Obvious Ventures to sell some of their stock. CEO Ethan Brown and some other executives and board members are also participating.

By announcing a secondary offering so soon after hitting the public market, Beyond Meat is allowing those investors to work around the lock-up period that forbids insiders from selling for six months after the initial share sale. Under that schedule, shareholders would remain fully locked up until November.

The risk of waiting three more months is that the hype could wear off, even just a bit, and send the stock spiraling downward. After all, Campbell Soup is currently worth less than Beyond Meat despite having about 33 times the revenue. While the selling stockholders still own most of their stakes — none are selling more than about 10% — they’re at least allowed to take some risk off the table.

“Typically, very early follow-ons occur when the price has risen a lot, increasing the public float at a time when there aren’t a lot of shares available to investors,” said Jay Ritter, a finance professor at the University of Florida’s Warrington College of Business and an IPO expert. “The company and selling shareholders are happy to take advantage of investor optimism, and investors like the increased liquidity.” 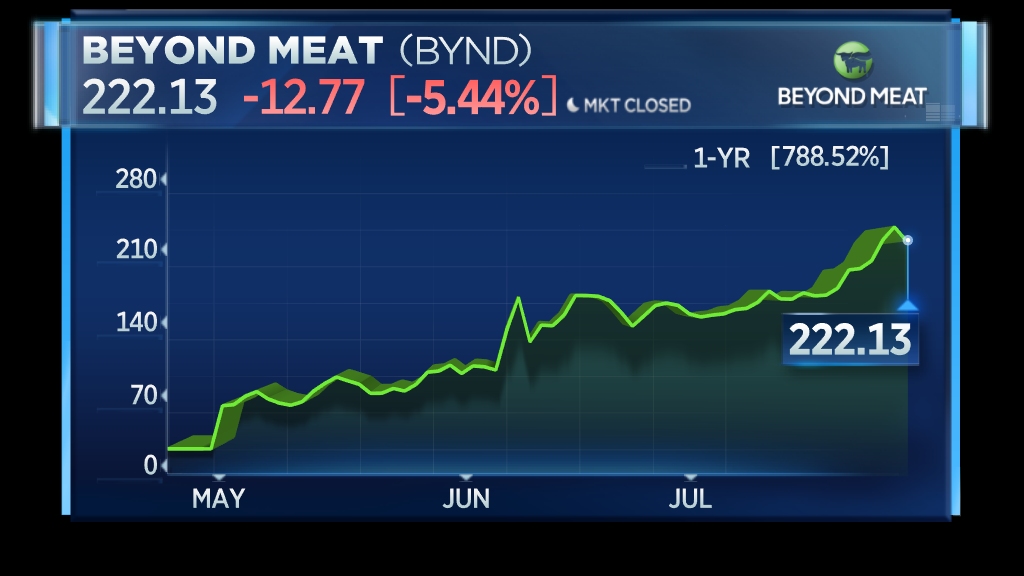 Venture-backed companies often hold secondary sales, but not so close to the IPO date. Among tech IPOs in recent years, only Splunk in 2012 announced a secondary within three months of its IPO, based on a review of FactSet data. That was at a 66% premium to the software company’s debut price.

Beyond Meat said that existing shareholders will be selling 3 million shares, equivalent to about 5% of shares outstanding, and the company will sell an additional 250,000 shares to to invest in building out its production capabilities and marketing its products.

Kleiner Perkins will sell almost 705,000 of its 7.75 million shares, assuming the underwriters exercise their options. Obvious, the firm co-founded by Twitter co-founder Ev Williams, will sell just over 405,000 of its 4.46 million.

The price of the offering hasn’t yet been disclosed. Beyond Meat shares tumbled 13% after the announcement to $192.60. A company’s stock often declines ahead of a secondary sale on concern that new shares will flood the market and there won’t be sufficient demand to keep the price up.

But nothing about Beyond Meat’s first three months on the market has been typical. The company’s market cap has jumped from $1.5 billion at its debut to over $13 billion at Monday’s close. In May, Canada’s Tim Hortons said it was adding Beyond Meat’s imitation sausage in a few markets, and more recently Dunkin‘ introduced a breakfast sandwich made with Beyond Sausage, starting at stores in Manhattan.

Beyond Meat’s revenue surged 287% in the quarter to $67.3 million, exceeding analysts’ estimates of $52.7 million, according to Refinitiv.

Correction: This story has been updated to reflect Beyond Meat reported quarterly earnings for the second time as a public company on Monday.