Latest News
Home /GE needs to clear this level for the turnaround to be real, chart suggests

General Electric has powered up this year.

The onetime market dud has soared more than 40% in 2019, on pace for its first positive year in three and tracking for its best annual gain in two decades. It had spent the previous two years in free fall with investors unconvinced its turnaround efforts were gaining traction.

It still needs to clear another hurdle as it heads into its earnings report Wednesday, according to one technician.

“It’s too early to call it a bullish long-term turnaround,” said Katie Stockton, founder of Fairlead Strategies, Tuesday on CNBC’s “Trading Nation. ” “There’s been a loss of long-term downside momentum relative to 2017 and 2018 but it’s really fallen short of breaking out and solidifying that bullish reversal.”

Despite its strong gains this year, the stock remains in a bear market having fallen more than 20% from a 52-week high last October. It is still 82% below its record set in 2000.

“The resistance level that I’m watching is about $10.70 so a breakout that’s confirmed, meaning you spend a couple of weeks above that level, would really solidify a turnaround for GE in my eyes which has really just been range-bound and somewhat neutral in terms of momentum,” said Stockton. 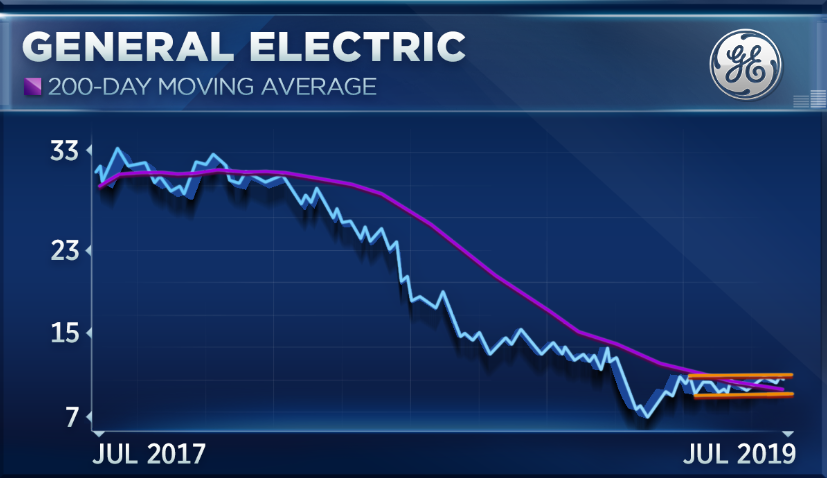 A move to $10.70 is roughly a 2% gain from current levels. It last touched that level a week ago before retreating.

“On the downside, I’m watching minor support around $9.75. I’d like to see that level remain intact at least to preserve the neutral bias of the chart but we really need that breakout to get excited about it,” said Stockton.

“The market has given the company and the stock price the benefit of the doubt on the turnaround … but from here we need to see sustainable earnings and free cash flow growth,” Tengler said in the same “Trading Nation” segment.

Adjusted earnings are expected to fall by around 33% in its June-ended quarter, according to FactSet. In the same quarter a year earlier, earnings declined by a sharper 44%.

“Long term the only way you can look at this company is sum of the parts. There’s no meaningful dividend to give you any indication of what management thinks long-term sustainable earnings power is i.e., raising the dividend from here so I’m on the sidelines,” said Tengler.

How a top Google exec…

A Nissan intern sat in…