Traders work on the floor of the New York Stock Exchange (NYSE) on February 6, 2018 in New York City.

The Federal Reserve is expected to cut rates this week for the first time since 2008, potentially giving investors the green light to play offense. CNBC took a look at stocks that tend to pop on the day the central bank pulls the trigger. 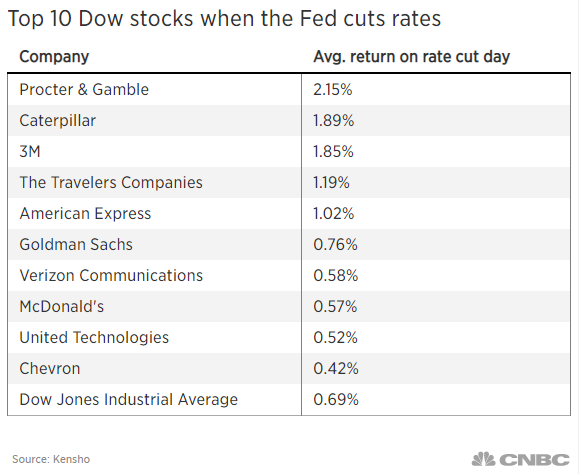 CNBC analysis using Kensho, a hedge fund analytics tool, found the stocks in the Dow Jones Industrial Average with the highest one-day return when the Fed initially cut rates in each cycle going back to 1990. The first rate reduction in every easing cycle took place in 1995, 1998, 2001, 2003 and 2007. General Electric and DuPont are excluded as they are no longer in the Dow.

The 30-stock index climbed 0.7% on average on rate-cut day as an easier monetary policy is typically bullish for stocks especially cyclicals like industrials. Procter & Gamble takes the cake as the best-performing stock in the Dow on decision day, rising 2.2% on average. Caterpillar and 3M both jumped nearly about 1.9% when the Fed lowered interest rates.

Investors have piled into big dividend payers on rate-cut day as Verizon, Chevron and P&G, all having attractive dividend yields, have done well in the past.

The Fed will announce its latest decision on whether to adjust interest rates at 2 p.m. ET Wednesday. The central bank is widely expected to cut its benchmark lending rate for the first time in more than 10 years. Fed Chair Jerome Powell has signaled his willingness to do what it takes to sustain the record-long expansion.