Latest News
Home /If the Fed cuts rates this week, it could widen a growing rift within the central bank

There’s a good chance one or two, and maybe even three, Fed officials could disagree with the central bank’s decision to cut rates Wednesday, and that could make it more difficult for markets to glean the course of future Fed policy.

The Fed’s policy arm, the Federal Open Market Committee is widely expected to vote in favor of a 25 basis point rate cut Wednesday, while a minority of economists say it’s possible the Fed could cut 50 basis points, in order to get a bigger response out of the economy. The fed funds futures market reflects a 73% probability of a quarter point hike, and 27% of a half point move.

“I would guess some members of the FOMC feel like they’ve been painted into a corner here because of the very aggressive pricing in the market,” said Ethan Harris, head of global economics research at Bank of America Merrill Lynch. “You’ve already had [Boston Fed President Eric] Rosengren come out and say he doesn’t think a rate hike is justified. Most members of the committee are willing to consider rate cuts but the impression is the big three seem to have put a bulls eye on the July meeting, and I’m not sure that’s shared by the whole committee.”

Both Kansas City Fed President Esther George and Boston’s Rosengren have spoken against cutting rates, and a third possible dissenter, St. Louis James Bullard could disagree with the committee if it opts for a larger rate cut of 50 percentage points, over the 25 percentage point cut he would like to see. In late June, he said a 50 basis point move would be overdone.

“The big debate there is going to be between the core of the committee and others, like Rosengren. It’s the core of the committee that I think would like to act aggressively. It’s possible you get three dissents,” said Rick Rieder, BlackRock chief investment officer, global fixed income. “The size of the dissents we get are going to be influential as to how the markets are going to price. If you get a good deal of dissents, the markets are going to discount future moves.”

Rieder said he puts odds of about 40% on a half percentage point cut. “If you get a good deal of dissents, the markets are going to discount future moves. Partly that is why I think there is a better than 60% chance” for a quarter point cut.

Scott Minerd, Guggenheim global chief investment officer, said Powell will try to rein in the dissent. “I think if you had two or three dissenters, it would tell you that there’s a bigger uncertainty around the path of future rates than what the market is currently anticipating,” he said. He added that Powell, who is not an economist, will rely on Clarida and Williams to help convince other Fed officials on why the cuts are needed. 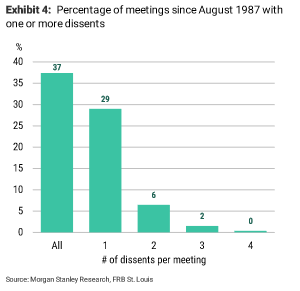 “I don’t think all of them are on board for 25, but I think there will be a lot of pressure to get them on board. There will be people who will try to get them to move 50, and they’ll say ‘let’s meet in the middle and try to compromise and show unity,” he said.

Williams surprised markets earlier this month when he said in a speech before the annual meeting of the Central Bank Research Association that “it’s better to take preventative measures than to wait for disaster to unfold.” That and other comments caused a shift in market views to expect a greater probability of the the more aggressive 50 basis point rate cut. But the Fed later said that Williams was not discussing current policy when he made that comment.

The next day Boston’s Rosengren appeared on CNBC and said he didn’t see a need to trim the federal funds target rate range, now between 2.25 and 2.5%.

George, speaking to the Wall Street Journal, said this month that she was prepared to be flexible but didn’t see reasons for a rate cut.

BofA’s Harris said he does not see a big group of dissenters. “I don’t think the committee as a group wants to present themselves as fractured,” he said. “What the Fed is doing is unprecedented. There’s no historical precedent…There’s no example that with still above trend growth and still above trend labor growth has the Fed eased in the middle of an expansion. This is a six sigma event. If there were more clear evidence that the trade war was hurting, this would only be a small departure from normal but actually the data in the last month has improved.”

Some dissents not uncommon

Fed chief Powell has spelled out that the Fed is willing to ease if necessary because of low inflation, slowing global growth and the potential negative impact of trade wars. He also said the Fed would act as appropriate to ensure the continuation of the economic expansion, a departure from its normal stated mission.

Morgan Stanley economists expect a half percentage point cut, and they note that dissents are not uncommon. Since Greenspan was named Fed chief in 1987, there have been one or more dissenters at 37% of FOMC meetings. they noted.

“What’s more, in the last major easing cycle (2007-08), someone dissented at almost every meeting, and usually for tighter policy,” they said in a note. In that cycle, the Fed took the fed funds rate range to zero to 0.25%, the lowest in history. There was a seven year gap before its next rate move, and in 2015, the Fed raised rates, and did it eight more times, the final one in December.

But when it came to multiple dissenters, only two Fed officials voted against the majority 6% of the time, and three did it at just 2% of the meetings. The Morgan Stanley economists said dissenting parties were mostly Fed presidents when policy was tightening, based on research by the St. Louis Fed.

“Based on these conclusions alone, one could suggest that Fed governors, typically favoring easier policy, did not dissent since 2005 because they got their way. This raises the prospect of the Fed governors— all of whom we believe will vote for a 50bp cut on July 31 — getting their way again, at the expense of one or more FRB presidential dissents,” said the Morgan Stanley economists, in a note.