Latest News
Home /Tech stocks are soaring and could rise another 20%, according to S&P 500 history dating back to 1990

Tech stocks are having a great year. The S&P 500 Information Technology sector has soared more than 30% so far in 2019, making it the best-performing S&P 500 sector by a wide margin.

And the run may be far from over, according to data from Kensho, a machine learning tool used by Wall Street banks and hedge funds to identify potential trades based on market history.

Since 1990 the tech sector has gained between 20% and 40% from January through July on just five other occasions. Following these gains, the sector has traded positively through the rest of the year in every instance, with tech stocks adding an average return of more than near-24% during these periods, according to a CNBC seasonal trading analysis of Kensho data. The S&P 500 also performs well in these periods, gaining close to 11% between August and December. 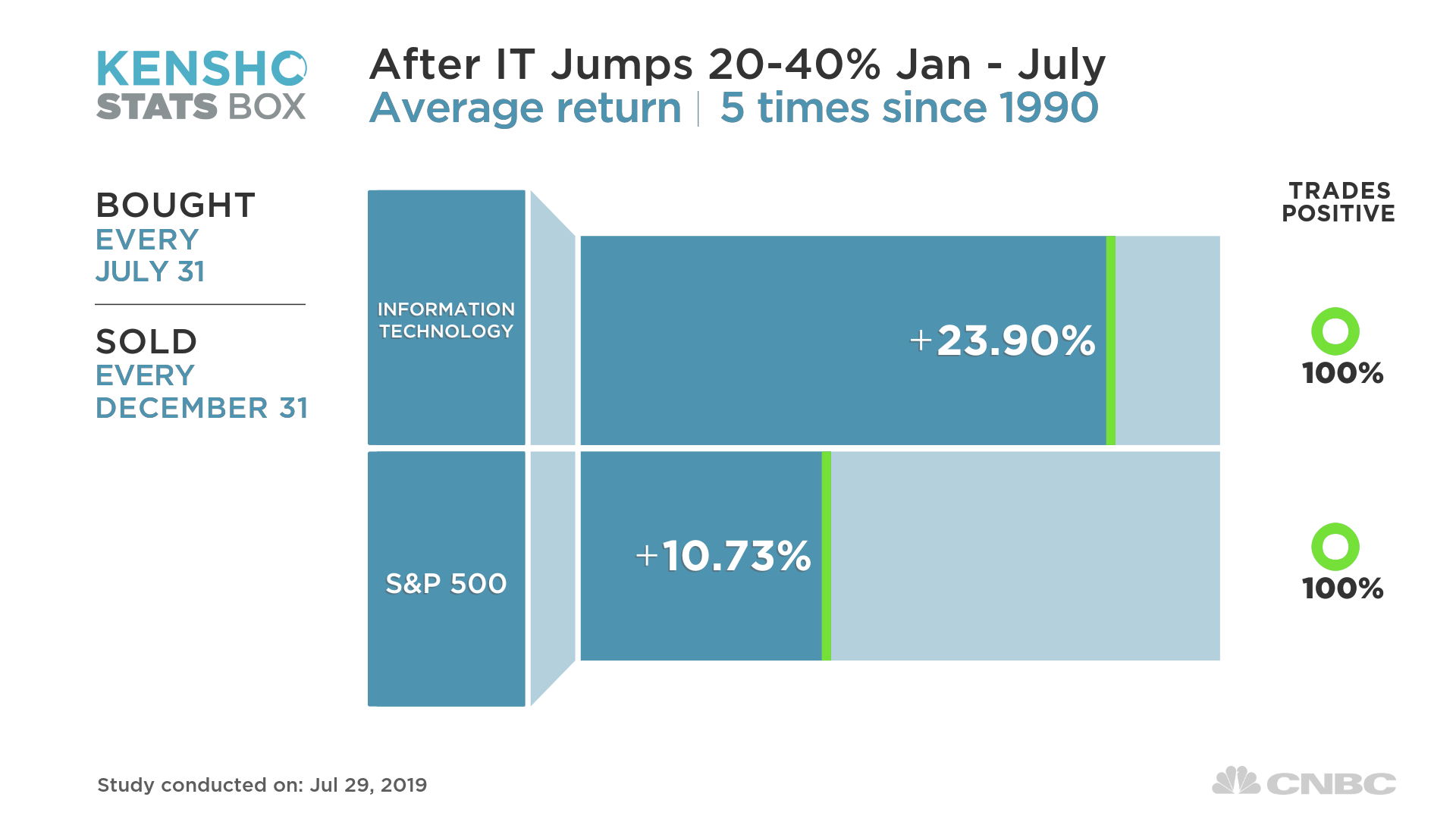 One caveat for this moment in time: In periods when the Federal Reserve is starting to cut interest rates, tech has tended to underperform, according to Kensho data. The Fed is expected to announce a rate cut — its first in over a decade — when its two-day FOMC meeting ends on Wednesday.

Yet nothing seems to slow tech down.

Last week there was a major announcement from the Department of Justice about antitrust investigations targeting big tech companies in search, social and online retail. The Nasdaq proceeded to hit a new all-time high.

Even with the trade war between the U.S. and China far from over, and tech stocks in the crosshairs of both governments, the S&P tech sector, as tracked by the Technology Select Sector SPDR (XLK), also hit an all-time high last week. Semiconductor stocks, in particular, have rallied strongly this year even though the chip business is sensitive to the trade tensions.

A trader works in the S&P 500 pit on the floor of the CME Group’s Chicago Board of Trade.

Consumer tech bellwether Apple, which reports after the close on Tuesday, is up about 33% this year, mirroring the tech-sector run.

CNBC’s Jim Cramer is focused on the Apple quarterly earnings as a short-term boost for the market. “I know it’s a big week for earnings, but I’m really focused on Apple,” Cramer said Monday on CNBC’s Squawk Box. “There’s a lot of thought that Apple — people are so bearish on it — that it can rally on a subpar number.”

Apple is the second-largest holding after Microsoft in the S&P infotech sector, representing roughly 16% of the sector index. Microsoft, which recently reported a strong earnings beat on both the top and bottom line, represents roughly 20% of the tech benchmark. Microsoft is up near-39% this year. 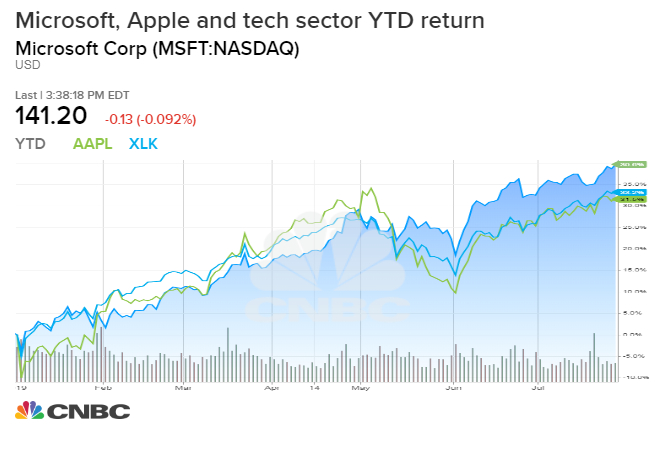 Many market strategists are bracing for a pullback in stocks with the market already up so much.

Stocks were little changed on Monday, with both the S&P 500 and Nasdaq falling slightly, while the Dow Jones Industrial Average eked out a gain. Premarket trading on Tuesday was negative, as new comments from President Trump about the likelihood of a trade deal with China weighed on stocks.

Oppenheimer Asset Management’s John Stoltzfus recently told CNBC that investors have done so well they will not wait long to get out: “Any kind of disappointment in a sense, okay, I can kind of take profits today without FOMO [fear of missing out] gripping my soul.”

He believes that lack of a resolution to the trade war is the biggest headwind holding back stocks from moving even higher.

Mike Wilson, Morgan Stanley’s chief U.S. equity strategist and chief investment officer, wrote in a note to clients on Monday that the S&P 500 level of 3,000 makes it vulnerable: “We think this latest surge will fail again, as we don’t expect a Fed cut to rekindle growth the way market participants may be hoping, and now pricing.”