The old investing mantra “don’t fight the Fed” stands the test of time for a reason. 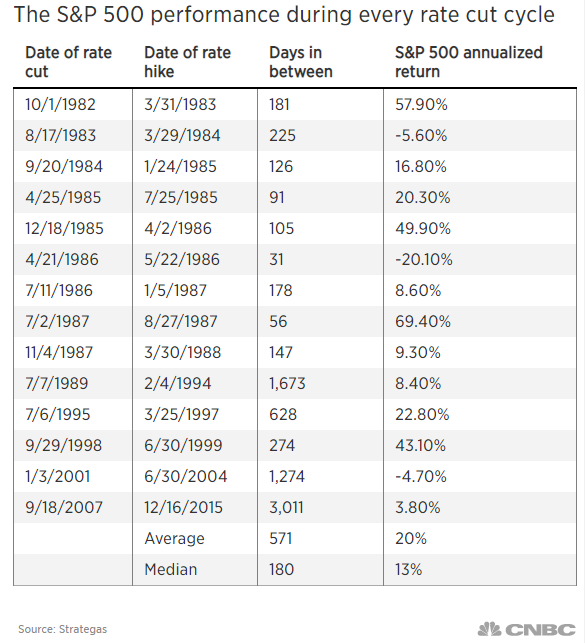 Going back to 1982, the average annualized return for the S&P 500 between the first rate cut and the next hike has been 20%, while the median increase has been 13%, according to Strategas. The data show investors would do well if they invest in a way that aligns with the Federal Reserve’s policy direction, rather than against it, hence “don’t fight the Fed.”

The Fed is set to announce its latest decision on interest rates on Wednesday. Investors widely expect the central bank to cut its benchmark lending rate for the first time since 2008, embarking on a rate-cutting cycle that’s been so bullish for stocks.

“Declines in returns during an easing cycle occasionally happen but are exceedingly rare,” Jason Trennert, chief investment strategist of Strategas said in a note to clients on Monday. “With policy rates and 10-year yields at the highest levels in the developed world, the Fed appears to have plenty of room to ease without fear of prompting overheating.”

Over the past 14 easing cycles, which lasted 571 days on average, the S&P 500 only fell three times during those periods, data from Strategas show. The latest Fed cutting series that ended in December 2015 was the longest in history, stretching 3,011 days, while the overall market climbed nearly 4%.

When the Fed decided to deliver an insurance cut in 1995, similar to what the market is expecting this week, there were clear winners in the stock market, Trennert pointed out. Technology sector surged 19.8% in the three months following the first rate cut in 1995, while financials rose 11.6% in the meantime, according to Strategas.

Fed officials have signaled their willingness to do what it takes to sustain the record-long expansion, citing uncertainties from the U.S.-China trade war and a global slowdown weighing on the U.S. economy.