“The stock market seemed disappointed with Powell’s performance, perhaps because while Powell did not suggest this was a ‘one-and-done’ cut, there was no overt messaging that a September cut is guaranteed,” said Don Ellenberger, senior portfolio manager at Federated Investors.

However, Powell told reporters in a news conference following rate decision that the central bank’s rate cut was a “mid-cycle adjustment, ” hinting that further rate cuts later this year are not a sure thing.

“That refers back to other times when the FOMC has cut rates in the middle of a cycle and I’m contrasting it there with the beginning of a lengthy cutting cycle. That is not what we’re seeing now, that’s not our perspective now,” Powell said.”You have to look at not just the 25 basis-point cut, but look at the committee’s actions over the year.”

“We started off [the year] expecting some rate increases. We then moved to a patient setting for a few months and now we’ve moved here,” he added “As we’ve moved to more accommodative policy, the economy has actually performed as expected with that gradual increase in support.”

Those comments sent equities to their lows of the day, led by momentum stocks such as Microsoft and Amazon. The U.S. dollar also hit its highest level in more than two years against a basket of currencies. The benchmark 10-year Treasury yield jumped above 2.07% before falling back to around 2.02%. 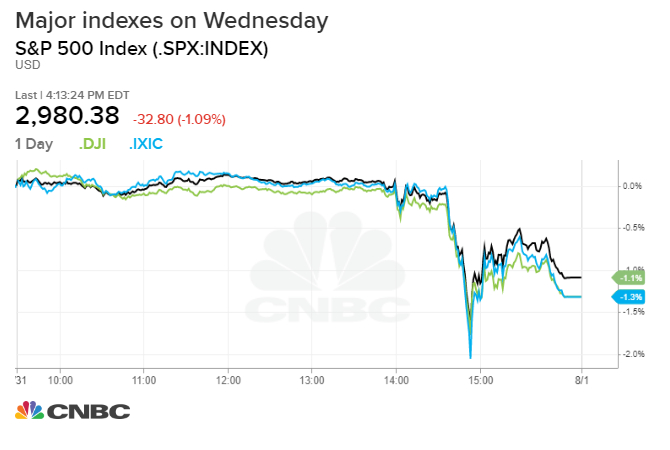 “Our whole story has been the markets are pricing two scenarios. They’re pricing in a 70% chance of two cuts, i.e. a mid-cycle adjustment and a soft landing, and a 30% probability that they cut to zero. That would be the beginning of a rate-cut cycle because we’re going to a recession,” said Mike Collins, senior portfolio manager at PGIM Fixed Income. “The markets are discounting the latter scenario and emphasizing the former.”

However, Powell did suggest this rate move was not necessarily a one-off either.

“He corrected himself. The market was clearly construing his comments to mean the Fed was very much one and done,” said Gregory Faranello, head of U.S. rates at AmeriVet Securities. “In the end, this means more than anything a pick-up in volatility.”

“The trends that hurt the most are in place. Equities are lower, the dollar’s higher and the yield curve is flatter. Before we came into this meeting, these were some of the things we were thinking about the Fed alleviating,” Faranello added. “This is very much a pain trade and the pathway forward is extremely uncertain. The idea for further cuts is clearly on the table but I don’t think it’s a no-brainer by any stretch of the imagination.”

The cut comes amid mixed economic data. U.S. economic growth slowed down to 2.1% in the second quarter. However, that growth rate was better than expected.

“The Fed has capitulated to softer economic growth. Inflation is headed lower, but recession is unlikely,” said David Abramson, chief U.S. strategist at Alpine Macro, in a note. “Policy reflation should put a floor under stock prices and sustain the forward earnings multiple, even as overall profit momentum fades in the coming months.”

The major indexes posted solid monthly gains despite Wednesday’s drop. The S&P 500 and Nasdaq gained 1.3% and 2.1%, respectively, in July. The Dow climbed 1% this month.

Apple reported Tuesday evening earnings per share and revenue for the previous quarter that topped analyst expectations, sending the stock up 2% on Wednesday. The company also issued better-than-expected revenue guidance for the fourth quarter.

“Overall, when we consider AAPL’s valuation with the company’s fundamental levers for further EPS upside, we see a balanced reward profile relative to the risks,” said Jeriel Ong, an analyst at Deutsche Bank, in a note. Ong added Apple’s “stabilizing” trends will likely give investors more confidence.

Nearly 60% of S&P 500 companies have reported earnings so far. Of those companies, 76% have posted stronger-than-forecast quarterly profits, according to FactSet.