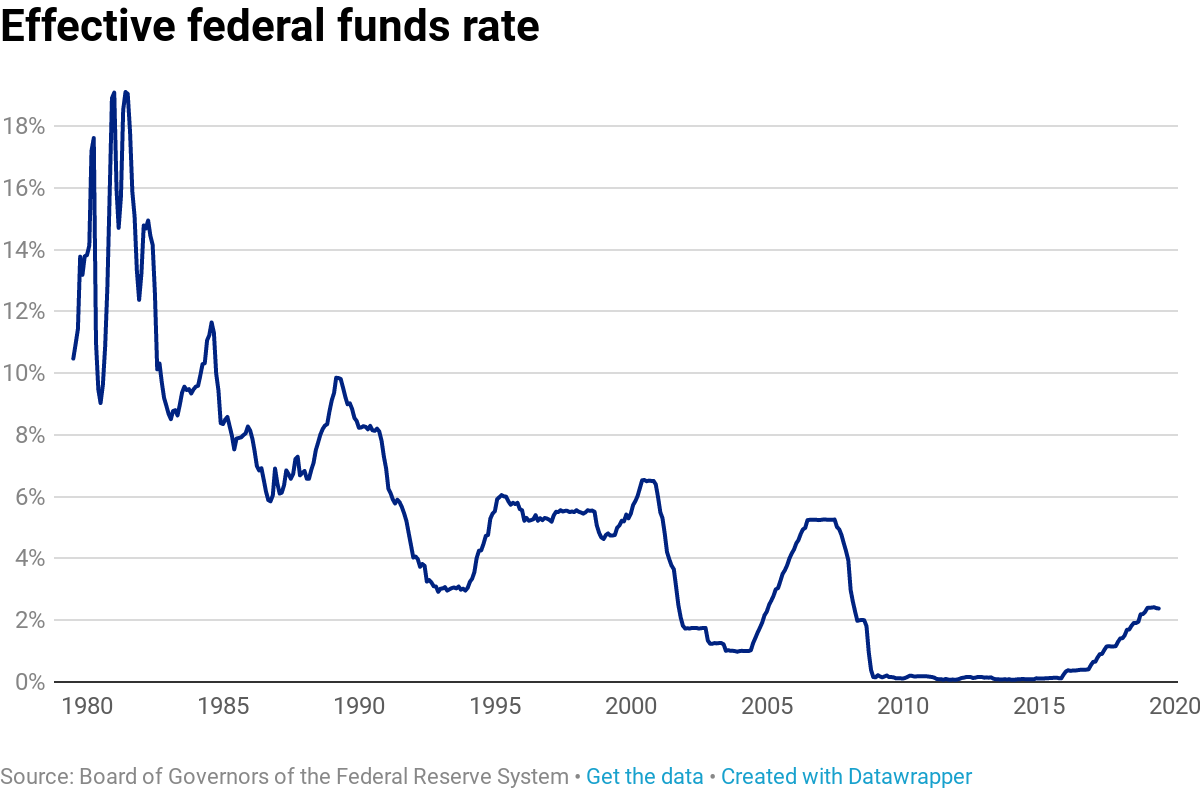 Investors, economists and politicians alike will turn their attention to the Federal Reserve on Wednesday for what many suspect will mark the central bank’s first interest rate cut since the depths of the 2008 financial crisis.

And while Wall Street insiders spar over their myriad readings of the monetary tea leaves and whether — or how much — the Fed should ease borrowing costs, what remains uncontested is just how far interest rates remain below historical levels.

What is the federal funds rate?

Central to the Fed’s power is its ability to affect how much banks charge each other for lending money on an overnight basis, known as the federal funds rate. The Fed doesn’t have the authority to mandate and enforce a particular federal funds rate, so it’s forced to influence the money supply to move interest rates toward its target range, currently 2.25%–2.5%.

The more money the Fed pumps into the economy, the more cash available for banks to lend and the lower interest rates fall. That, in turn, affects how much banks charge individuals and businesses to borrow.

At their core, banks turn profits by lending money at a higher interest rate than at which they borrow from depositors or other financial firms. Thus, when the Fed forces banks to pay more to lend to each other, it tends to affect how much banks charge everyone else for auto loans, mortgages and a host of other borrowing.

So effective are the Fed’s adjustments to the money supply that many economists and financial outlets use shorthand when writing about the central bank’s decision-making by simply saying it raised or cut interest rates.

History of the rate

Markets anticipate that the Fed will lower its target federal funds rate range by 25 basis points at its two-day policy meeting that began on Tuesday.

Some, like President Donald Trump, feel such a move wouldn’t go far enough and criticized the Fed throughout its hiking cycle that it kicked off in 2015. The Fed has hiked nine times since then, with the last four increases occurring in 2018 under the direction of Trump-appointee and Chairman Jerome Powell.

Others point to the strength of the U.S. economy as evidence easier monetary policy isn’t necessary: the unemployment rate is under 4%, GDP growth remains above levels economists deem sustainable and inflation and real wage gains remain modest.

But for all the Fed’s tightening over the past several years, the effective federal funds has yet to breach 2.5%, less than half the peak rate before the financial crisis in 2007. In fact, the rate was virtually zero from 2009 through 2015 as central banks around the world worked to boost flailing economies with low-rate money and historic quantitative easing.

It’s only been in the past two years that the rate showed signs of life, last observed at 2.4% according to data kept at the New York Fed. That’s far below the effective federal funds rates of the days of Paul Volcker, when banks were charging each other north of 16% in the 1980s as the Fed worked to “break the back of inflation.”