Under Armour is under pressure.

The athleisure company warned of weaker demand in North America, its largest market, sending its shares plummeting 12% on Tuesday in its worst one-day drop in two years. Those losses pushed the stock into a correction, having fallen more than 10% from a July high.

Katie Stockton, founder of Fairlead Strategies, says the stock could have further to fall before finding a bottom.

“A gap down in a stock is never a good thing. It’s definitely a short-term setback for Under Armour. It does affect the short-term outlook, it makes it more negative, supporting additional corrective price action,” Stockton said Tuesday on CNBC’s “Trading Nation. “

The stock could find support at around $22.25, which aligns with its long-term 200-day moving average. It briefly dipped below that on Tuesday before closing at around $24. It would need to drop 8% to reach that level again.

However, the bull case for its years-long strength remains intact on the charts, she adds.

“It’s not affecting the long-term uptrend, which is somewhat gradual,” said Stockton. “I would still consider Under Armour to be a long-term turnaround play.” 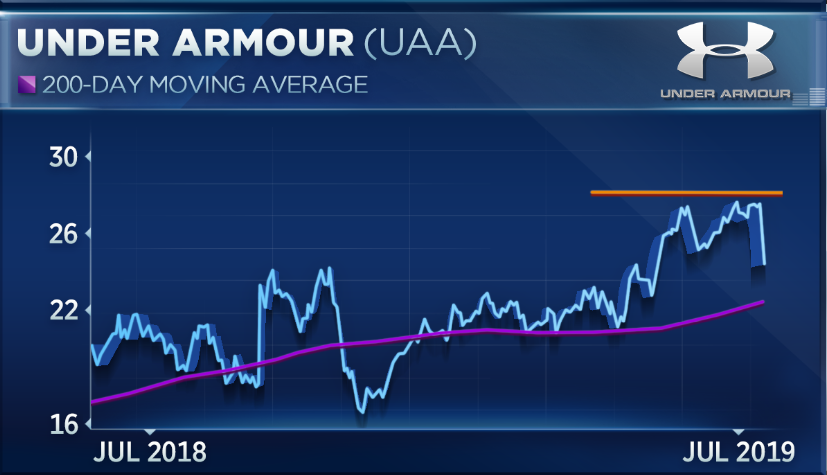 Even with Tuesday’s losses, Under Armour remains sharply higher for the year. It has gained 36% in 2019, racing higher alongside athleisure and sportswear competitors Lululemon, Adidas, and V.F. Corp.

Nancy Tengler, chief investment strategist at Butcher Joseph Asset Management, says management at companies such as Under Armour and Lululemon has played a massive role in their outperformance this year. However, she is steering clear of the entire apparel retail space in favor of a different slice of the consumer market.

“Instead of being exposed to apparel, we’ve put our clients’ money in things like Starbucks and McDonald’s and Home Depot, more consumable kinds of consumer discretionary items, and even some of the staples like Costco, Walmart and P&G. That’s where we’re focused in the moment, ” said Tengler.

Consumer discretionary stocks Starbucks, McDonald’s and Home Depot have led the space higher and have each hit record highs in July. Costco, Walmart and P&G have also outperformed the market.