Tesla has confirmed that an employee was found dead in its Nevada Gigafactory earlier this month.  This raises concerns about workers’ safety yet again with the exact cause of death still unknown.  A pending autopsy report could help clarify the circumstances that led to the incident. 61-year-old Michael Johnston was found dead in the third floor of the Gigafactory on July 22.

The Storey County Police Department (SCPD) hinted that the death might have been “medical in nature.” But the probe is still ongoing.   An internal investigation by Tesla also found that there were no hazards present in the area where the death occurred. The company maintained that there is no reason to believe that the employee’s death was related to his work.

Workers’ safety has been a thorny issue for Tesla in recent times.  In order to meet tight production quotas, Tesla has been accused of overworking employees while disregarding safety concerns. A report by the Occupational Safety and Health Administration (OSHA)  found that Tesla factory employees spent three times as many sick days in 2018 compared to the previous year.

Staff in Tesla’s assembly plant in Fremont, California logged a total of 22, 454 lost days in 2018. This was considerably higher compared to just 7, 619 days in 2017. But it is important to note that there is no correlation between the number of sick days logged and workplace-related injuries. Just because employees logged sick days does not necessarily mean they were injured at work.

Tesla has also been accused of under-reporting injuries. Reveal found in a controversial investigative report that officials at an onsite clinic in Fremont “prioritized under-reporting injuries” over growing safety concerns. A Forbes review found 24 open safety investigations at the facility. Tesla has already been fined for 54 violations that occurred between 2014 and 2018.

Tesla’s Fremont plant has over 15,000 workers. It’s the largest auto production facility by employee volume in the US. It can be argued that managing such a huge facility while maintaining safety standards, especially against tough production deadlines, is literally impossible.

But it’s still difficult to let Tesla off the hook on this one partly because the company has reported significantly higher injury rates compared to other carmakers. Tesla’s cumulative fines were higher than the penalties paid by ten of the major US automakers combined. 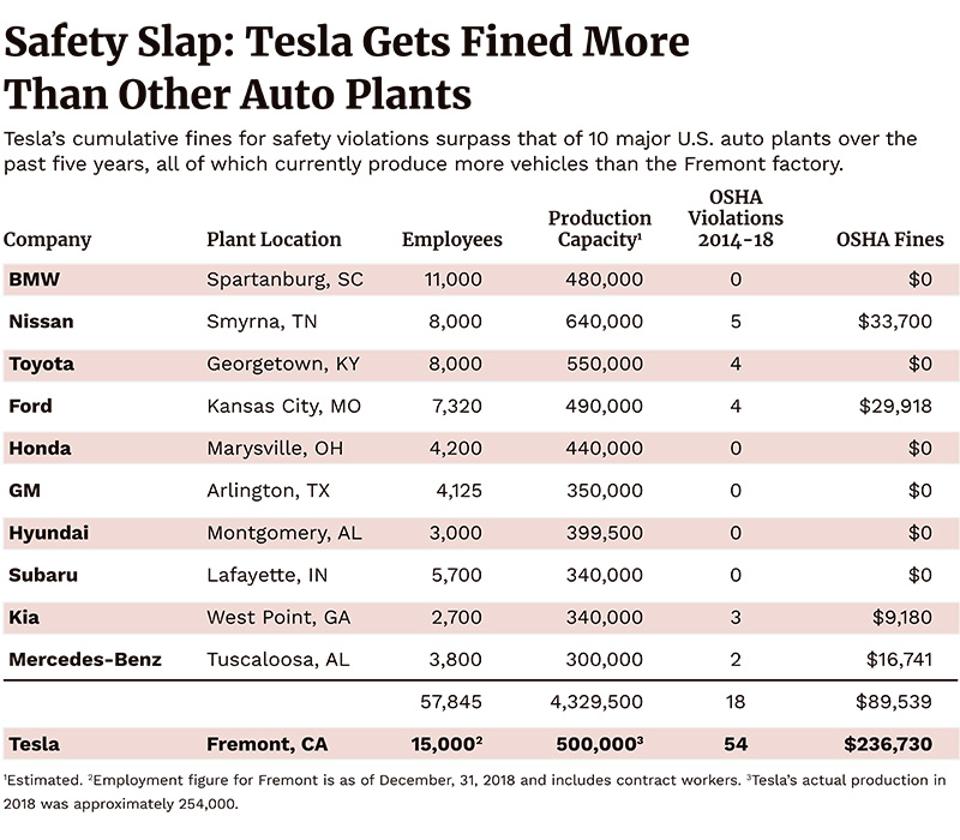 Tesla’s OHSA safety violations were also three times higher than the total reported by the entire auto industry. The company has however said that it’s working to enhance workers’ safety. Stringent safety regulations in California could also be blamed for high fines and safety investigations.