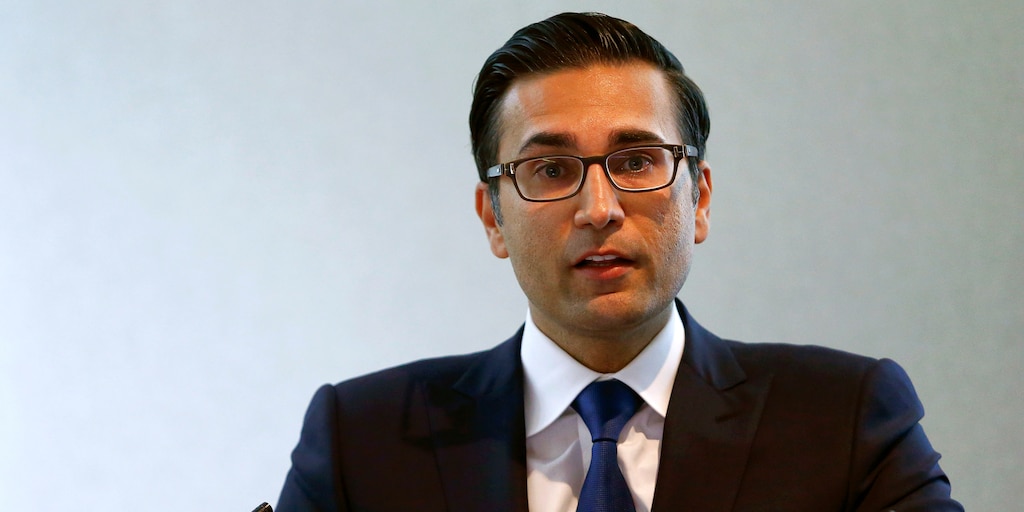 The secretive world of Swiss banking has been rocked by a public scandal involving spies, a suicide, and a clash at a cocktail party.

Credit Suisse hired private investigators to spy on Iqbal Khan, the head of its wealth management division, after he feuded with CEO Tidjane Thiam and left for local archrival UBS earlier this year.

The fiasco has culminated with the resignation of both the Swiss bank’s operating chief and head of global security, and the death of the contractor who hired the spies to follow Khan.

Here’s a timeline of what happened:

Background: Tidjane Thiam was appointed CEO of Credit Suisse in March 2015 after running UK insurer Prudential for six years. The French-Ivorian, a former McKinsey consultant, launched a three-year turnaround program that resulted in the Swiss bank posting its first annual profit in four years in 2018.

Iqbal Khan, who was born in Pakistan and moved to Switzerland at the age of 12, spent 12 years as an auditor at EY. He joined Credit Suisse’s wealth management division in 2013 and rose to CEO two years later. He oversaw an 80% increase in divisional profit and helped bring in upwards of $46 billion in net new assets between 2016 and 2018, according to the Financial Times.

January 2019: Thiam and Khan clash at a cocktail party

Thiam hosts a cocktail party at his home in the tony Herrliberg area on the “gold coast” of Lake Zurich, according to the Financial Times. Khan and his wife — who bought the house next door, bulldozed it, then redeveloped it over the course of nearly two years — are among the guests. Thiam complained to Credit Suisse Chairman Urs Rohner about the disruptive construction work, the Financial Times reported.

After Khan and Thiam’s partner squabble over some trees planted on the CEO’s property, Khan and Thiam have an argument away from the other guests. Khan’s wife has to separate them, Swiss newspaper Tages-Anzeiger reported.

Spring and summer: Khan complains to Credit Suisse. He meets with UBS and others.

Khan complains to Rohner and Credit Suisse’s board about the incident, widening the rift between the two and creating an unpleasant working environment, the Financial Times reported.

Khan is allowed to quit with a shortened gardening leave period of three months. During meetings with UBS, Julius Baer, Goldman Sachs, and other prospective employers, he expresses a desire to recruit former Credit Suisse colleagues across structured trading, lending, relationship management and other functions, the Financial Times reported.

Credit Suisse announces Khan is leaving the company. He makes the move after growing frustrated with his profile within the bank, number of public appearances, and a lack of assurances from Thiam and other executives about his potential to rise further up the ranks, according to the Financial Times.

“He’s in a rush, wants a huge job and had become a bit frustrated because there’s no room at the top here — Tidjane isn’t going anywhere and he wasn’t comfortable in his seat,” a person familiar with the developments told the newspaper.

UBS announces Khan will become its co-president of global wealth management on October 1. Pierre-Olivier Bouee, Credit Suisse’s operating chief, orders the bank’s security chief to begin observing Khan out of concern he may be planning to poach clients and former coworkers. Bouee’s worries are elevated by the fact that Khan continues to socialize with key Credit Suisse employees.

September 17: Khan confronts one of his tails. He files a complaint with Zurich’s public prosecutor.

During a shopping trip, Khan spots and confronts one of his tails in downtown Zurich. He exits his car and photographs the license plate of the private investigator’s vehicle. The investigator confronts him, asks him to stop, and tells Khan to hand over his phone. Khan shouts for police help, and the investigator departs.

Khan files a complaint with Zurich’s public prosecutor, saying three men chased him and his wife through the streets of Zurich by car and on foot. He says things turned physical behind the Swiss National Bank, when the men tried to take his mobile phone as he was photographing them and their car.

However, the detective provides a sworn statement to Credit Suisse and authorities that he was alone that day, and Khan chased him, the Financial Times reported. The bank instructed the investigator to follow Khan only on weekdays from a suitable distance and take note of the people he meets, without breaking any criminal or traffic laws, according to a document seen by the newspaper.

September 23: The bank announces an external inquiry into its decision to observe Khan.

Credit Suisse’s board says it has appointed external consultants and lawyers to inquire whether executives signed off on the decision to hire private investigators and if the move was justified.

Zurich’s public prosecutor’s office confirms it has opened a criminal case for coercion and threat, and city police have made three arrests, the Financial Times reports.

An unnamed contractor who hired Investigo to trail Khan on behalf of Credit Suisse dies by suicide. A lawyer for Investigo later confirms the death to the Financial Times.

September 26: Pressure mounts on Credit Suisse to address the scandal.

“It’s something of extreme gravity; in Zurich it is becoming a time bomb and you can feel the panic,” a major investor in the bank told the Financial Times. “Both sides have been damaged, but especially Credit Suisse.”

“We have said to the chairman and board they have to provide a clear outcome and explanation; whoever did wrong has to pay,” the investor added.

September 30: The Swiss bank’s board meets to discuss the findings of the investigation.

Inside Paradeplatz, a Swiss financial blog, reports the contractor’s death by suicide. Credit Suisse’s board meets to discuss the findings of an investigation into the spying scandal by Homburger, a law firm.

“The Board of Directors considers that the mandate for the observation of Iqbal Khan was wrong and disproportionate and has resulted in severe reputational damage to the bank,” Credit Suisse says in a statement.

The Homburger inquiry failed to find any evidence that Khan tried to poach employees or clients, the bank added, or any indication that Thiam approved the spying or was aware of it before it ceased on September 18.

Credit Suisse says Bouee alone, “in order to protect the interests of the bank,” ordered the observation of Khan, and he didn’t discuss it with Thiam or any other executives.