Mark Benioff seems to have changed his mind about Adam Neumann.

The Salesforce founder and co-CEO penned a glowing profile of WeWork’s cofounder and former CEO for Time 100 last year. Yet Benioff appeared to criticize Neumann at TechCrunch Disrupt last week, suggesting an earlier IPO could have forced his coworking company to clean up its act, and implying he may have put profits ahead of ethics.

“Adam is ­revolutionizing the way we work and reimagining how we live,” Benioff wrote in the news magazine’s 2018 list of the 100 most influential people in the world. “Adam and I connect on leading values-driven companies that serve a larger purpose, beyond making money.”

In April 2018, Benioff tweeted his congratulations to Neumann for being selected for the Time 100. In December 2017, he tweeted a selfie with the WeWork cofounder and thanked him for donating $180,000 to wildfire victims. 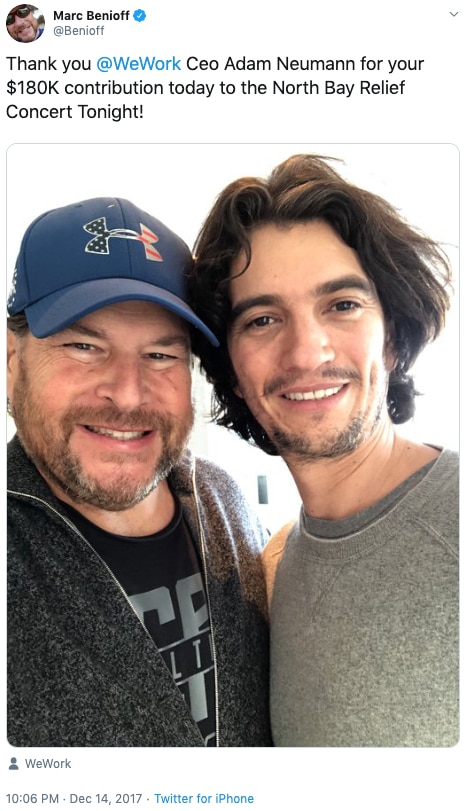 Benioff struck a starkly different tone at the tech conference last week, following the collapse of WeWork’s IPO last month and numerous unflattering revelations about Neumann. He replied to a question about governance issues at private companies such as WeWork and Uber — and whether a stock-market listing can safeguard against them — by saying they’re “staying private way too long.”

Going public “cleanses their company of all of the bad stuff,” Benioff added. “It forces them to apply the regulations necessary to have a clean company.”

Asked whether founders know best and deserve complete control of their firms given the WeWork debacle, the Salesforce chief appeared to indirectly criticize Neumann.

“You have to think about what kind of business are you building,” Benioff said. “You’ve got to operate with that level of values and that level of ethics.”

“If your orientation is just about making money, I don’t think you’re going to hang out very long as a CEO or a founder of a company,” he added. “You have to be more than that in today’s world.”

Salesforce didn’t immediately respond to a request for comment.

Benioff’s comments could relate to Neumann’s apparent use of his company to enrich himself. WeWork’s IPO filing revealed Neumann charged his business $5.9 million to use the “We” name, while the Wall Street Journal reported Neumann made millions from his stakes in property companies leasing spaces to WeWork, and cashed out more than $700 million by selling and borrowing against his company’s stock.

WeWork’s IPO documents also showed it paid one of Neumann’s immediate family members to host eight company-related events last year, and employed another as its head of wellness. Neumann’s cofounder and wife Rebekah, WeWork’s chief brand and impact officer, was originally a member of the committee charged with selecting his successor as well.

The public backlash to Neumann’s behavior — combined with investors’ concerns about WeWork’s valuation, mounting losses, complex structure, and other issues — led the company to replace him as CEO and scrap its plans to go public. WeWork is now trying to secure funds to finance a restructuring plan that could include thousands of job cuts and the sale of several ancillary businesses.

Read more: A New York real-estate group sounded the alarm on WeWork years before it plunged into chaos