In a media yearbook of 2019, you might find Disney Plus under the label of “most likely to succeed.”

Flixed, a company that provides services and tools to help people cut the cord, surveyed in August more than 1,000 people in the US who said they used streaming services to watch TV shows or movies to find out which forthcoming services those users were most interested in.

Roughly a quarter of the respondents said they planned to sign up for Disney Plus, which launches in the US on November 12 for $7 per month.

The share of respondents who planned to sign up or Disney Plus was greater than the percentage who said they would subscribe to Apple TV Plus, HBO Max, and NBCUniversal’s Peacock, combined. 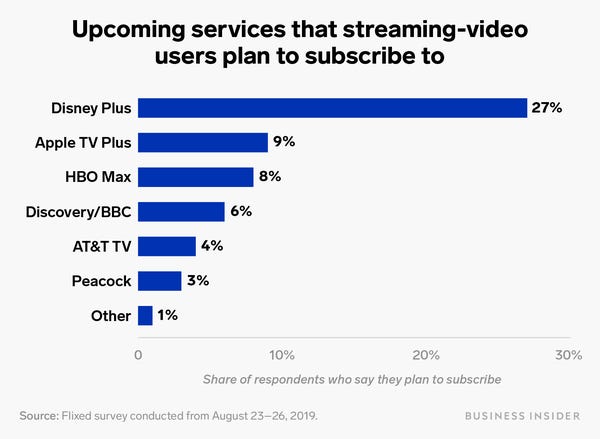 Apple TV Plus pulled in the second-largest share of respondents who said they planned to signed up. It shows the brand power of Apple, which had only unveiled a handful of upcoming originals for its service by the time the Flixed survey was conducted, including trailers for “The Morning Show” and “For All Mankind.” It was also clear by the time of the survey that Apple’s offering would not include a back catalog of licensed content, like the ones legacy media companies Disney, WarnerMedia, and HBO Max are relying on to flush out their platforms.

That was around the point that Disney ramped up marketing for Disney Plus during its biannual fan convention, D23. It was also before Apple announced the $5 monthly price tag and initial show lineup for Apple TV Plus. And it was before NBCUniversal revealed the name of its upcoming streaming offering, Peacock, and details on the programming that would be included in it.

Read more: How Disney Plus, HBO Max, and NBC’s Peacock streaming service stack up in the battle against Netflix

An earlier August survey by Wall Street research firm UBS also found that about 40% of the US respondents were “likely” to subscribe to Disney Plus when it became available.

Read more: A new survey finds Disney Plus has a huge advantage in signing up subscribers but shouldn’t be considered a Netflix killer

Disney Plus is already available in the Netherlands, where Disney released the service early to work out the kinks. Aside from a few annoyances, like the service’s failure to remember the point in a show or movie a viewer left off after pausing or stopping the video, users seemed generally pleased with it, The Wall Street Journal reported.

Still, some analysts are concerned about how much money Disney will need to spend to keep the service stocked with fresh content, and keep users coming back month after month, with so many other offerings out there. JPMorgan, which is bullish on Disney longterm, slashed its earnings forecast for Disney’s upcoming fourth quarter, in part because of growing streaming costs.

It was unclear from the Flixed survey what kind of impact subscriptions to upcoming services like Disney Plus would have on existing offerings like Netflix.