Latest News
Home /Next stock market crash: Why a meltdown by year-end is on the table – Business Insider

You should brace for another pullback in the stock market before this year runs out, say equity strategists at RBC Capital Markets.

The worst of it could take place at the tail-end of the year, similar to the Christmas Eve meltdown of 2018. It may also come sooner. But regardless of the timing, RBC Capital Markets sees compelling reasons why another investors should remain on standby for another pullback by Dec. 31.

The team led by Lori Calvasina laid out their concerns in a recent note to clients. Their case is broadly threefold: history suggests a pullback is coming, there are risks aplenty for the market, and valuation is extremely stretched.

Starting with the historical evidence, Calvasina notes that the rally in stocks since the market’s low on Dec. 24 has been similar to the recoveries from three growth scares since the financial crisis: in 2010, 2011, and 2016.

All of these market recoveries suffered between two and four sell-offs, ranging in severity from a 4% pullback to a 10% correction. There have been three such episodes so far in 2019, “suggesting that another would not be all that unusual,” Calvasina said.

But these historical parallels don’t lay out the full evidence. There is a bevy of risks — some already impacting markets and others on the horizon — that could serve as negative catalysts in the coming weeks.

To name a few:

Read more: The world’s most accurate economic forecaster sees a ‘prolonged global slowdown’ on the horizon — and warns it can only be narrowly avoided

Most metrics say stocks are overvalued

All these potential catalysts are confronting a market that is overvalued by most major metrics.

The S&P 500 forward price-to-earnings ratio hit a new high relative to its global counterpart before the fourth-quarter sell-off in 2019. It is now 18.6 — a 1.8 standard deviation from the mean, above its long-term average, and higher than every other major region in the world, Calvasina said.

To consolidate all the additional valuation gauges, RBC created an S&P 500 Combo Model which takes into account 17 different ones.

“At 1.16 standard deviations as of October 16th, this gauge remained above average and was close to the peaks of the current cycle,” Calvasina said.

She added that it was in a range historically associated with 12-month forward returns in the low single digits. 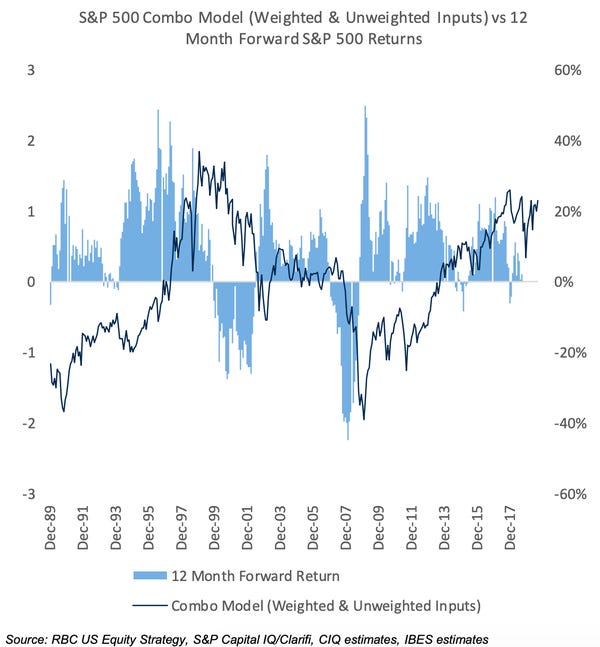 Calvasina further observed that the relative valuation between US stocks continue to look overvalued relative to the rest of the world.

Ultimately, she is still bullish on the stock market. Her S&P 500 year-end target of 2,950 implies a roughly 18% gain for the year. She is overweight large-cap industrials, financials, utilities, and real estate.

But she’s also prepared for a lot of zigzagging on the way to that target — and is advising clients to buckle up too.