Latest News
Home /Beyond Meat insiders will finally be able to cash in their shares next week. Heres why that could spur vicious selling and dent the stocks 340% post-IPO surge. (BYND)

Mark your calendars. Beyond Meat, one of the strongest performing initial public offerings of the year, will end its lockup period on Tuesday, October 29.

On that day, a chunk of roughly 48 million shares — or about 80% of the company’s shares outstanding — will become eligible to trade freely on the public market. And if shareholders elect to cash in on Beyond Meat’s nearly 350% price surge since going public, it could spur a sharp sell-off.

“Given the dramatic appreciation since the IPO, we expect many insiders and private equity funds to cash out, putting further downward pressure on the stock,” wrote Arun Sundaram of CFRA in a note Monday.

Such a sell-off would be a boon for short sellers, which have amassed a $672 million wager against the company, according to the financial-analytics provider S3 Partners. Any sort of sharp decline would lead to some long-awaited gains, considering the stock’s steep upward trajectory.

The lockup expiry will also mean there will be more shares available for short sellers to borrow, thereby lowering borrowing costs, Ihor Dusaniwsky, managing director of predictive analytics at S3 Partners, told Markets Insider in an email. Since Beyond’s IPO, shorts have paid $423 million to borrow, and 75% of their losses to date can be attributed to those prohibitively high costs, S3 says.

Read more: A vast majority of Wall Street analysts think Peloton is undervalued following its IPO flop. Here’s what 5 of them are saying.

“It will take a few days to a week, after the initial wave of long sales settle for shares to start hitting the stock lending market and we should expect rates to dip below 100% fee rather quickly, and depending on how many shares get into lending programs, fall into the 10%-40% fee range in the very near term,”Dusaniwsky wrote.

The timing of the lockup expiration — which will come one day after the company’s third-quarter earnings report — could also create further volatility. Shares gained sharply after Beyond’s first release, and fell sharply after its second, showing that investors are watching the company closely for signs of growth and future profitability.

The lockup expiry won’t be the first time the market has seen additional shares of Beyond Meat hit the market. In July, the company announced after its second quarter earnings release that it was selling an additional 3.25 million shares in a secondary public offering, which gave early investors an opportunity to cash out post-IPO gains of nearly 800%.

Read more: MORGAN STANLEY: US stocks are poised to end their worldly dominance for the first time since the financial crisis. Here’s the best way to profit from that shift. 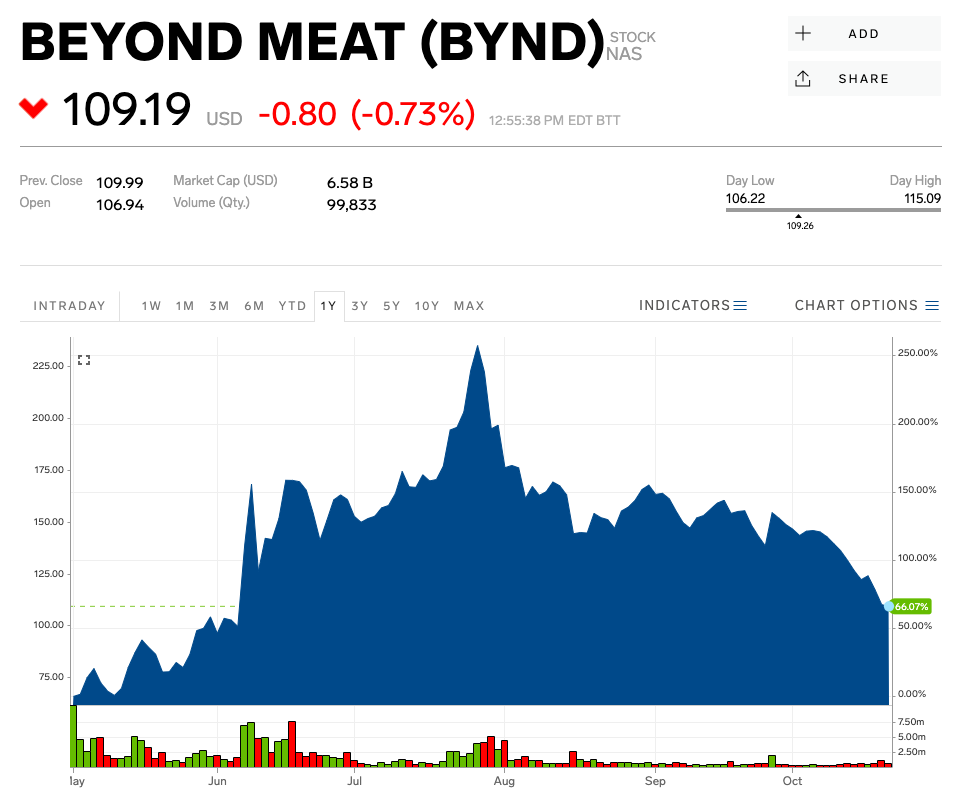