Albert Edwards has seen this playbook before.

The global strategist at Societe Generale is drawing attention to the fact that stock prices are running far ahead of the actual profits that companies are delivering.

Such a mismatch is not entirely unusual. It is, after all, the premise of buying growth stocks — many of which are money-losing companies that invest in cash-burning endeavors today so they have the capacity to deliver profits in the future.

However, Edwards is of the view that investors’ expectations for such companies have spiraled out of control just like they did during the dot-com bubble.

The chart below, which he shared in a recent note to clients, illustrates the disconnect he sees between valuations and profits that reminds him of the 1990s. 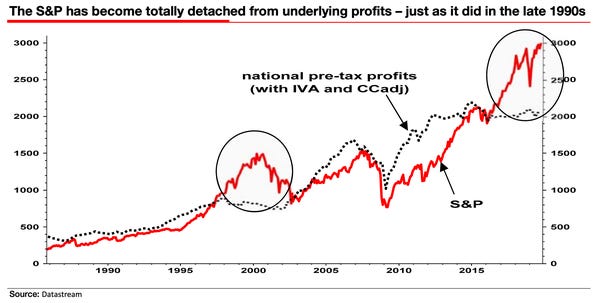 The tech industry has become the focal point when anyone talks about richly valued growth stocks, having delivered one of the strongest sector returns of this bull market. Its gains have come at the expense of other S&P 500 sectors and value stocks — those considered bargains because they trade at more reasonable prices relative to their fundamentals.

This outperformance of growth over value — and of tech over almost everything else — informs Edwards’ thesis that a rollback is coming.

The role of the next recession

At the height of the dot-com bubble, Edwards found that exuberance within the tech sector helped inflate long-term earnings expectations for the overall market. And he cautioned that an economic slowdown would be enough to prick the bubble.

But he did not only warn about the tech industry. He also sensed danger for stocks that had premium, growth-like valuations even though they were highly cyclical in nature and vulnerable to an economic crunch.

The 2001 recession exposed and collapsed tech along with these non-growth stocks that had “illusory” earnings expectations attached to them.

Fast-forward to 2019, and Edwards sees the same scenario repeating itself soon.

He warns that the next economic recession will not only ravage tech stocks, but others that have been wrongly assigned growth-like valuations.

His chart below shows that analysts are reining in long-term earnings forecasts at the same time as early recession signals are beginning to flash.

Profit expectations are falling after two straight quarters of growth declines in the first and second quarters of 2019. Analysts expect the July-September quarter to be three-for-three

“The unfolding profits recession will expose the ‘growth’ impostors and they will collapse, as they are on the wrong ‘growth’ PE valuations with the wrong EPS projections,” Edwards said.

He continued: “Just like in 2001, investors will not wait to distinguish true ‘growth’ stocks from the impostors. Investors will slam the whole sector and work it out later.”

One auxiliary observation he makes on the severity of his forecast is that the share of public companies — numerically and by market cap — with fewer than 10 years of trading history has exploded since 1999. Numerically, it has grown from about 4% then to roughly 14% today. Since this record-long expansion is more than 10 years old, an “unusually high share” of the market has never experienced a recession.

He concluded, “US IT is now above 20% of the US market cap, the same as it was just six months before the tech bubble peaked in March 2000. Carnage awaits.”