Latest News
Home /Why Apple TV Plus will struggle against Disney Plus, HBO Max – Business Insider

Apple’s upcoming streaming competitor, Apple TV Plus, will be the cheapest streaming platform available when it launches on Friday for $4.99 a month.

But with only four original shows at launch, which haven’t generated much critical acclaim, the service won’t give subscribers much value compared to others.

The chart below, from streaming search engine Reelgood, shows the monthly cost of six streaming services, including Disney Plus, which launches November 12. 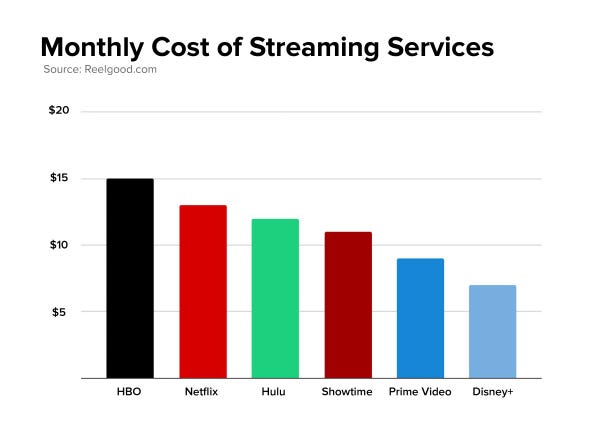 They are all more expensive than Apple TV Plus, but when considering their robust content libraries compared to Apple’s slim collection at launch, Apple TV Plus seems more costly.

Even without licensed content, Netflix still released 2,400 hours of original content last year, according to an estimate by the Wall Street firm Cowen and Company. HBO has continued its string of quality programs after “Game of Thrones” with critically acclaimed hits like “Chernobyl,” “Euphoria,” and “Watchmen.” Hulu CEO Randy Freer said in June that the service’s investment in original programming would “increase significantly” now that Disney has full ownership. And Prime Video has been beefing up its original programming; its new superhero series “The Boys” is one of the platform’s biggest hits with audiences and critics.

The chart below illustrates the amount of TV shows, both original and licensed, on the most prominent six platforms (not included is HBO Max, which debuts in May for $14.99 a month and will include over 10,000 hours of content at launch as well as 69 original series by the end of 2020). 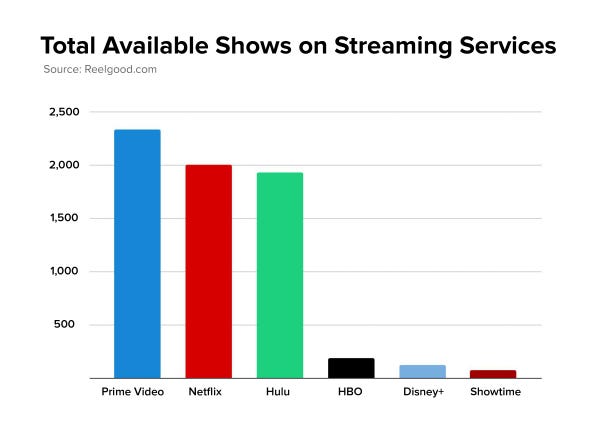 Apple doesn’t have a library of licensed content at the moment like those other platforms, meaning it will rely on its original programs for Apple TV Plus. And its four launch shows — “The Morning Show,” “See,” “For All Mankind,” and “Dickinson” — have received subpar or just plain bad reviews ahead of the service’s debut.

“The lack of experience in making TV is evident all over ‘The Morning Show,’ and it’s proof that making good TV requires more than spending lots of dough, hiring famous people, and screaming, ‘Action!’,” TV Guide’s Tim Surette wrote.

“For All Mankind” and “Dickinson” have received a more positive reception at 83% on Rotten Tomatoes each, but with fewer reviews. That’s still not a great average for the four shows, though.

More shows will debut on the service before the end of the year, such as M. Night Shyamalan’s thriller “Servant” and the Octavia Spencer-starring “Truth Be Told.” But with so little content, it’s hard to say whether Apple TV Plus will be able to significantly compete in the streaming war, even when it’s giving a free year away to buyers of new Apple products.

Apple has touted its relationships with big industry names, from Steven Spielberg to Oprah. But when you shell out $300 million for a Jennifer Aniston, Reese Witherspoon, and Steve Carell TV show — and it still gets torn apart by critics — it’s not a good sign for your other celebrity partnerships.