Fear of missing out powers a lot of the stock market for good and for bad. But Mark Hackett, the chief of investment research for Nationwide, says the only way to succeed is to tune it out completely.

Hackett advises $67 billion in assets under management and says the worst pain in the stock market comes from the 20% of companies that are most volatile — and if investors manage to avoid those, they can succeed without doing much more.

“If you could just avoid the most volatile and the worst earners, you’re going to win in this game relative to everybody else,” he told Business Insider in an exclusive interview.

Hackett marshals 50 years of market data to back up his point. The chart below shows every US stock traded since 1968 and breaks them down into five groups based on volatility. While the four least volatile groups have performed about as well as the overall market, the most volatile group has done far worse — and unprofitable companies have performed just as poorly. 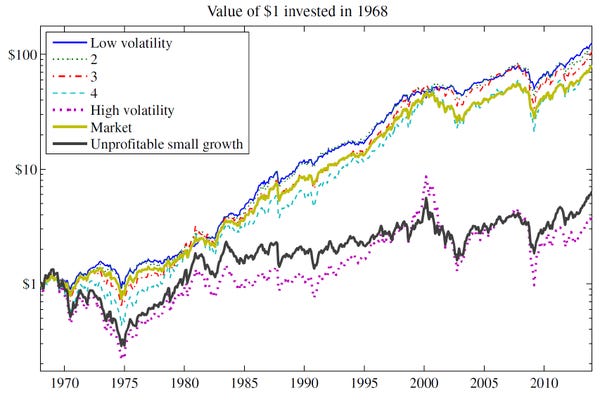 Mark Hackett of Nationwide says the most volatile and worst-earning stocks have stood out from the rest of the market for decades.

The question is how to stay out of that zone of pain. Hackett, who advises growth-oriented funds at Nationwide, said his early work in value investing taught him that profitability matters a great deal.

A simple way to put Hackett’s advice into practice is to focus on quality stocks, which are generally considered strong earners with low risk. Investors can do that through an exchange-traded fund like the Fidelity Quality Factor ETF. A second method is focusing on less-volatile stocks through a fund like the Invesco S&P 500 Low Volatility ETF.

He’s not averse to investing in companies that are losing money, but they have to have a plan to become profitable in a defined time frame. Without that, even if the stock is skyrocketing, Hackett said there was no way to evaluate whether the company is making progress and if it still makes sense as an investment.

“Once you get to that phase, you might have missed the first 300% move, but I’d rather get in late with the idea that it’s not going to be a zero,” he said. “I would always rather be late and be confident that the earnings are at least on the horizon than be early and risk losing everything.”

Plenty of investors want to find the next stock that could soar more than 1,000%, like Amazon. But Hackett said an investor who makes a habit of betting on those money-losing companies would miss much more often than they hit, and the losses over time can wipe out any successful bets they make.

“For every one that’s an Amazon, there’s probably a dozen you’ve forgotten about that were zeroes,” he said.

In its early years as a public company, Amazon often took big losses as it concentrated on aggressive growth. But Hackett said the company was always able to explain its goals and strategy. But a focus on growth and scale alone won’t make a unicorn into the next Amazon.

While unicorns are dominating the IPO market for now, Hackett said the stock market was beginning to see through them. That could make Amazon- and Netflix-style wins harder to find, but he argues that it ultimately makes for a stronger and more rational stock market.

“The world has woken up to the idea that you need to have an idea about how you’re going to make money,” he said. “I don’t see that as a negative for the market. I see it as a positive.”