It’s safe to say that John Hussman, president of Hussman Investment Trust, isn’t today’s most optimistic stock market proponent. After all, he’s been fervently warning of a 50% to 65% decrease in valuations over the course of the cycle’s completion for quite some time now.

But today Hussman is seeing a confluence of variables that’s providing him with even more reason to get out of dodge. Something that’s akin to a “phase transition” approaching a crucial tipping point.

“Investors should be fully aware of the present combination of extreme hyper-valuation, unfavorable market internals, and daily action that is characteristic of a ‘phase transition,’ specifically, internal dispersion followed by a leadership reversal,” he penned in a recent client note.

“Given valuations that rival both 2000 and 1929, my impression is that relying on further speculation is playing with fire.”

That’s a stark warning. In 1929, the stock market was edging towards a precipice that would lop off about 90% of its value and encompass the Great Depression. In 2000, the internet bubble was just about to burst and crush the Nasdaq by almost 80% — and he thinks markets are similarly positioned today.

Still, it’s important to note that Hussman’s intent isn’t to make a “market call” or provide a prognostication on “what’s going to happen.” It’s simply to demonstrate how this confluence of variables has behaved in prior market cycles. However, he does note that now wouldn’t be a bad time for investors to “carefully consider their risk exposures” going forward.

Why prospective returns are the lowest since 1929

Let’s take a closer look at his reasoning.

Right now, one of Hussman’s favorite measures of valuations is flashing red. 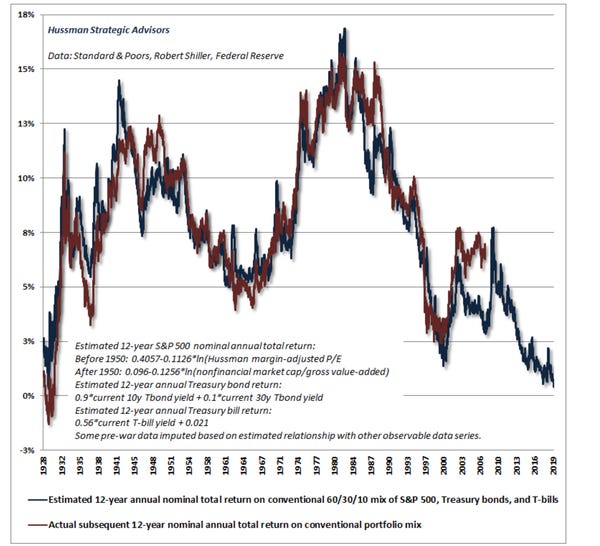 “Our estimate of prospective returns for passive investors is now lower than any week in history other than the August 26, 1929 market peak,” he said. “The journey from extreme valuations to even historically run-of-the-mill valuations can easily involve periods of 10-15 years where stocks underperform T-bills, with severe interim losses along the way.”

After 10-plus years of a bull market, Hussman’s proprietary model is projecting stock market returns that are just barely positive over the next 12 years.

With that in mind, he provides a more granular look at valuations to bolster his thesis.

The chart below depicts the median price-revenue ratio of S&P 500 issues, divided into 10 deciles that range from the highest 10% to the lowest 10%. As one would imagine, each of these deciles has distinct attributes as valuations vary across industries/sectors. Each decile is compared against its own history. 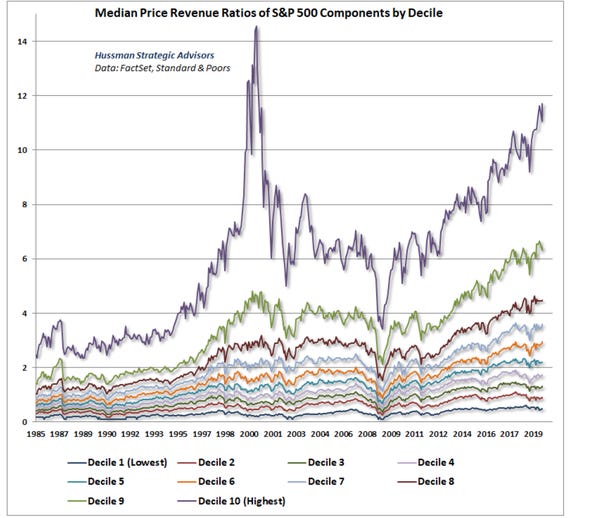 Against that valuation backdrop, Hussman notes the variables that are leading him to believe the market is currently undergoing a “phase transition.” Remember, it’s the confluence of valuations, internals, dispersion, and leadership changes which are responsible for the outlook.

1) Waning involvement: Less than 56% of stocks are trading above their 200-day moving averages.

2) The “Hindenburg” indicator flashing red: This includes the S&P 500 trading higher from 10 weeks earlier, new highs less than twice new lows, a negative measure of stock advances vs. declines, and two days with new highs and lows greater than 2.5% of issues.

3) An overbought environment: Relative strength index (RSI) confirming this notion with a reading above 65 in the last 10 trading sessions.

The chart below depicts this confluence of factors throughout history. A red bar denotes periods within 10 trading days of a record high in which the aggregate of these variables have been observed. Yellow bars identify 2.9% single-day declines or more in the S&P 500 index within 12 trading days of a signal. 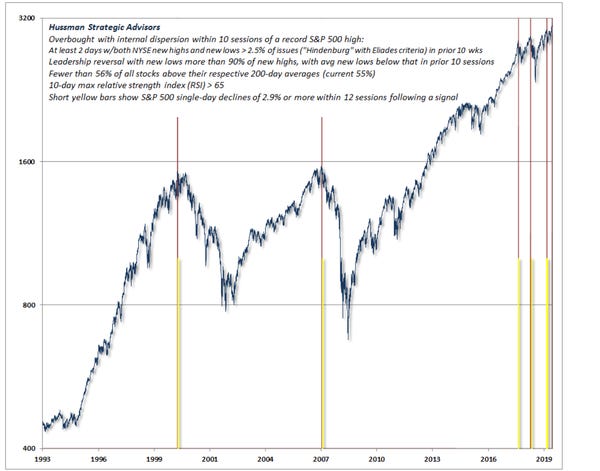 Clearly, Hussman’s analysis isn’t without merit. Steep market losses are not abnormal when the confluence of these factors turns negative, however, they’re not guaranteed either.

“Here and now, however, we observe features characteristic of a ‘phase transition,’ with the potential for severe market losses – not just a steep initial plunge including single-day losses on the order of 3% or more, but much more extended losses, which we continue to estimate on the order of 50-65% over the completion of this cycle,” he concluded.

For the uninitiated, Hussman has repeatedly made headlines by predicting a stock-market decline exceeding 60%and forecasting a full decade of negative equity returns. And as the stock market has continued to grind mostly higher, he’s persisted with his calls, undeterred.

But before you dismiss Hussman as a wonky perma-bear, consider his track record, which he broke down in his latest blog post. Here are the arguments he lays out:

In the end, the more evidence Hussman unearths around the stock market’s unsustainable conditions, the more worried investors should get. Sure, there may still be returns to be realized in this market cycle, but at what point does the mounting risk of a crash become too unbearable?

That’s a question investors will have to answer themselves — and one that Hussman will clearly keep exploring in the interim.