Robert Shiller popularized a benchmark metric for evaluating whether the stock market is overvalued: the S&P 500 Shiller CAPE ratio.

But the winner of the Nobel Memorial Prize in Economic Sciences is equally as preoccupied with qualitative factors that influence markets as he is with the raw numbers.

Shiller has long explored how narratives drive behavior and move the needles of both financial markets and the economy. In his book “Irrational Exuberance” for example, he presciently outlined the psychological factors and herd thinking that sowed the seeds of the dot-com bust and 2008 financial crisis.

More recently, Shiller focused on the market-moving power of oral tradition in a book aptly called “Narrative Economics.” And in a recent email exchange with Business Insider, he drew a direct link between one narrative trigger for the Great Depression and a potential catalyst of the next recession.

Shortly before the 1930s financial disaster — and within a century of the industrial revolution — the idea that technology would displace human labor became widespread.

Read more: Robert Shiller, Rick Rieder, and 18 more of the brightest minds on Wall Street reveal the most important charts in the world

Shiller noted that a book by the economist Stuart Chase called “Men and Machines” popularized the idea of so-called technological unemployment, which refers to job losses caused by automation.

If this idea sounds eerily familiar, it is because a similar concern is pervasive today — and artificial intelligence as the culprit this time around. Different iterations of AI are already changing the world, from algorithms that determine the severity of market sell-offs to smart suggestions about which shows we should binge-watch.

In order to quantify this fear of ‘the robots,’ Shiller produced the chart below. It shows the share of newspaper articles that have contained the phrases “technological unemployment” and “artificial intelligence” since 1900. The source is a ProQuest News database of more than 3,000 sources. 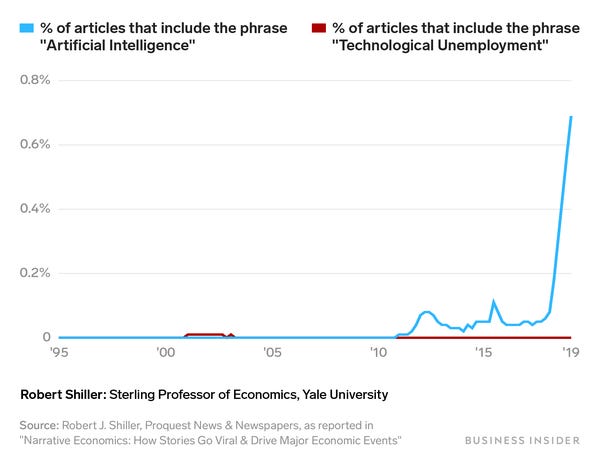 According to Shiller, the rise in attention paid to so-called technological unemployment that began in 1929 was an important factor in worsening the Great Depression. People became worried that their jobs would be permanently replaced by robots, and so they reined in their spending and subsequently drowned the economy.

“The phrase ‘artificial intelligence’ today is getting an even bigger surge, and represents a more existential threat to our sense of economic virility,” Shiller told Business Insider in reference to the huge spike in the chart.

His concern is that if the next recession substantially increases the unemployment rate — which is already near a 50-year low — the tech displacement narrative may gain more traction. And, in turn, it would worsen the recession as people change their spending habits out of fear that their career prospects are at risk.

“The surge of attention to ‘artificial intelligence’ is an order of magnitude bigger, but still hasn’t scared people so much so far, it seems,” Shiller said.

He concluded: “That could change in the future as the narrative develops further. (I did not directly compare these two phrases on one chart in the book, so this chart makes a new point, that the artificial intelligence narrative is much bigger than technological unemployment was.)”