Latest News
Home /Stocks are fresh off their most chaotic week since 2011. Heres why the market is so confused about whats next. 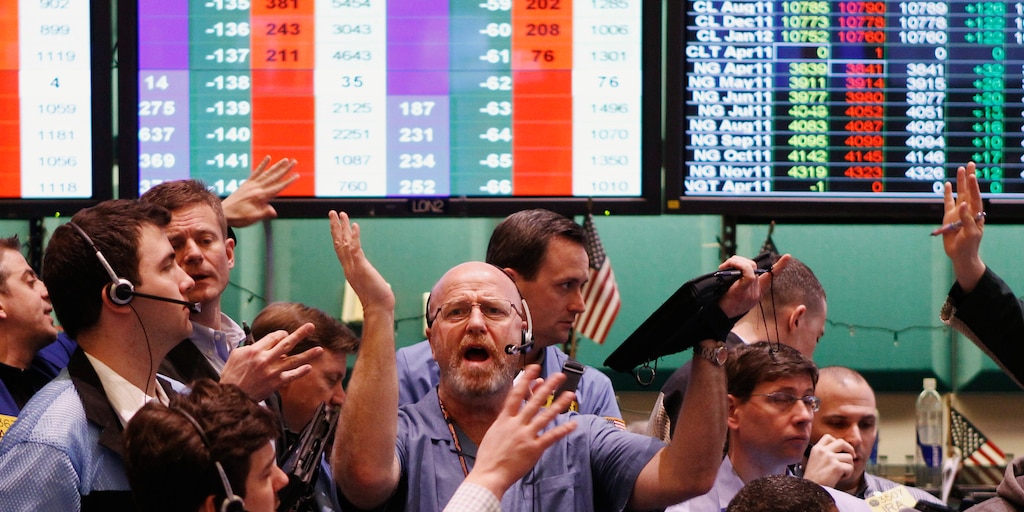 While the last week of February brought a steady and unrelenting decline for stocks, March’s first trading sessions gave investors their most topsy-turvy rollercoaster ride in years.

Major US stock indexes closed Friday having wiped out nearly all of their month-to-date gains after a few attempts to shake off coronavirus anxieties. The narratives that drove trading shifted by the day, leaving investors with little time to keep up and profit amid wild price swings.

The week that was

Monday’s open served as a sigh of relief for Wall Street as markets pushed higher after seven straight days of losses. Investors and analysts priced in at least a 25 basis point rate cut from the Federal Reserve on the heels of Jerome Powell’s February 28 statement.

Such stimulus would help boost consumer spending and prop up the economy as the coronavirus case count soared around the world. Some experts deemed a Fed cut ineffective in solving the virus-fueled supply shock, but their claims didn’t keep markets from closing with massive gains.

Yet the Fed’s move didn’t arrive as most expected. Tuesday saw the central bank slash its benchmark rate by 50 basis points, marking the first emergency rate adjustment since the 2008 financial crisis. Equities initially jumped on the news before moods shifted and pulled prices lower. Investors shrugged off the priced-in measure and turned their focus back to the escalating coronavirus.

Read more: ‘What if this is the thing that brings it down?’: A Wall Street investment chief explains how the stock market’s coronavirus-induced sell-off could push the US into a recession

Until Super Tuesday results began trickling in through the night and into Wednesday, markets had priced in Sen. Bernie Sanders’ significant delegate lead in the Democratic primary. Yet Vice President Joe Biden emerged the unexpected victor after clinching 10 states over Sanders’ four.

Any hope for a lengthy bull run faded by Thursday’s open. Stocks tanked as investors reversed their past optimism for global easing policies and turned focus back to the coronavirus’s grip on supply and demand. The S&P 500 reentered correction territory and the Dow closed 970 points lower, mimicking the sell-offs seen the week prior.

By Friday’s close, equities had ridden a wave of nearly decade-high volatility. The Cboe Volatility Index — or VIX, known as the stock market’s fear gauge — closed above 30 for seven sessions straight, its longest such streak since 2011.

Investors now have a weekend to further analyze the epidemic that legendary investor Ray Dalio recently deemed “one of those once in 100 years catastrophic events.” Coronavirus cases passed 100,000 on Friday as the outbreak spread further around the world.

US firms ordered employees to avoid non-essential travel as breakouts appeared across country. Others have called on staff to self-quarantine, prompting new worry around the virus driving a demand shock through the US economy. Much of the virus’s future development remains uncertain, leaving investors in the dark as to when volatility could die down.

Some experts have pinned the wild price swings to Wall Street’s increased use of algorithmic and quantitative trading programs.

“There could be any variety of triggers that can cause a shift from massive buying to massive selling and that’s just exacerbating the moves,” she said. “What we tell our investors is, ‘don’t try to play that game.'”

Read more: Nobel laureate Robert Shiller identifies a rising ‘existential threat’ to the economy’s expansion — and tells us why it’s similar to what made the Great Depression so severe

Others are turning to historical precedent to predict the market’s next moves. Past emergency Fed cuts suggest there’s plenty of room for stocks to fall before reaching their floor, analysts at RBC Capital Markets wrote Wednesday. Asset managers are still holding more than $150 billion in long stock positions, a sum that could place significant downward pressure on risk assets if sell-offs continue March 9, according to RBC.

The analysts also pointed to sentiment data gathered by the American Association of Individual Investors (chart below) to find a theoretical limit for the market downturn. Bearishness has climbed as high as 50% before reversing its trend in recent years, yet such readings only hit 39% in the middle of the late February selling streak, RBC said.

Market pessimism would need to continue climbing “before it makes sense to start considering whether a bottom has been put in place,” the analysts wrote. 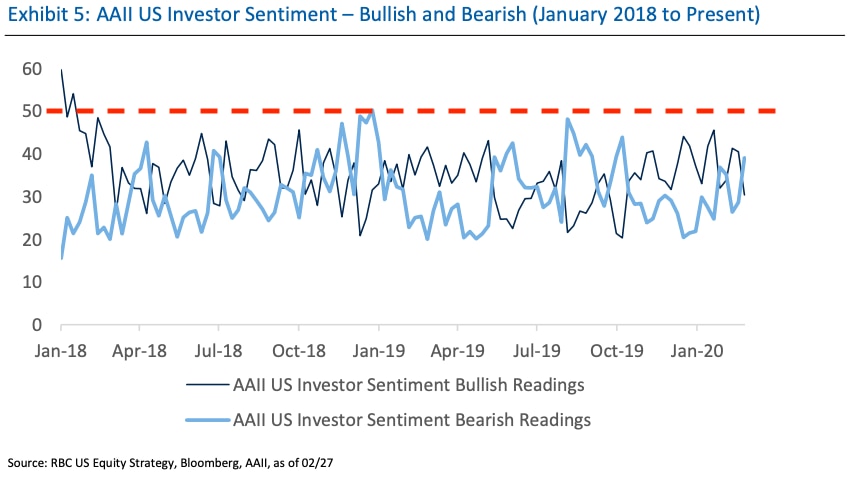 The growing warnings of supply chain disruptions, lowered company guidance, and possible global recession continue to keep investors on their toes and running for safe-haven assets. Treasury yields have notched multiple record lows in recent weeks, while gold has climbed to seven-year highs. The moves leave plenty of cash available for inflows should sentiments shift positive, and the heightened volatility hasn’t only contributed to markets’ downswings.

Economic data set to be released over the coming weeks is the best way to judge when a market recovery could arrive, according to Bank of America. Consumer confidence remains “key to whether global recession” will last months or weeks, the bank’s analysts wrote Thursday.

Investors also monitoring small business sentiment, jobless claims, and mortgage activity will be among the first to know whether the world economy avoids a recession or tumbles headfirst into one, they added.

Carmen Reinicke contributed to this report.

Expedia will continue to pay hourly workers during the coronavirus outbreak