New high-frequency data suggest that the swift, V-shaped recovery from the pandemic recession seen in early economic indicators may be losing steam as new coronavirus cases surge in the US.

Up until the last few weeks, there were positive signs of a quick recovery underway in the US. Economic indicators such as retail sales notched record jumps, and a number of high-frequency data in mid-June showed consumer activity heading in the right direction.

Last week, the June nonfarm payrolls report from the government showed a second month of record job creation since April, with US employers adding 4.8 million payrolls. The unemployment rate also ticked down again to 11.1%.

But while positive, the report captured only the first few weeks of June, and thus didn’t reflect any labor market reaction to a new surge in coronavirus cases that’s now threatening to derail the economic recovery.

On Thursday, the US reported 63,200 new COVID-19 cases, setting another daily record and pushing the country’s total above 3 million. In addition, states such as Florida, Texas, and California reported record deaths due to the virus.

“There are a couple of things that we are seeing and some of them are troubling and might suggest that the trajectory of this recovery is going to be a bit bumpier than it might otherwise,” Federal Reserve Bank of Atlanta President Raphael Bostic told the Financial Times in a Tuesday interview.

Read more: UBS lays out how a 2nd-wave coronavirus lockdown could lead to a devastating situation for stocks — one Wall Street has been warning about for months

Federal Reserve Bank of Cleveland President Loretta Mester echoed the message in an interview with CNBC, saying, “We saw a reopening in May and activity starting to come back pretty well. Over the past week or so, there’s been some leveling off, and I think it’s probably due to the increase in cases not only in Ohio but across the country.”

It’s unlikely that the US will shut down, as many states did in mid-March to contain the spread of the virus. This week, President Donald Trump’s top economic adviser Larry Kudlow said a second shutdown would be “a big mistake.”

But that doesn’t mean that the virus isn’t going to damage the economy. “There’s more evidence that what is really affecting economic activity throughout the United States in particular is not necessarily mitigation policies, it’s anxiety over the virus itself,” Ernie Tedeschi, an economist at Evercore ISI, told Business Insider.

Because of how swiftly the coronavirus pandemic is moving in the US and impacting areas such as consumer activity and the labor market, economists and industry watchers have turned to high-frequency indicators that can give them an idea of what’s happening in the economy more rapidly than government reports that come out once a month.

Read more: The top-ranked stock-picker in small companies has returned 13 times more than his peers this year. He breaks down the 5 little-known stocks he’s using to bet on the 5G and work-from-home revolutions.

“Our playbook in the past would rely on monthly data to keep us informed,” Robert Frick, corporate economist at Navy Federal Credit Union, told Business Insider. “Now I look at everything.”

To be sure, no one data point is a “silver bullet,” said Tedeschi. While it’s good to have many brand new metrics during the pandemic, “we also need to be cautious because we haven’t road tested them before. We haven’t kicked the tires on them in another recession,” he said.

Here are four high-frequency indicators that show signs that the V-shaped economic recovery is losing steam.

1. People have stopped moving around as much as new coronavirus cases have spiked. 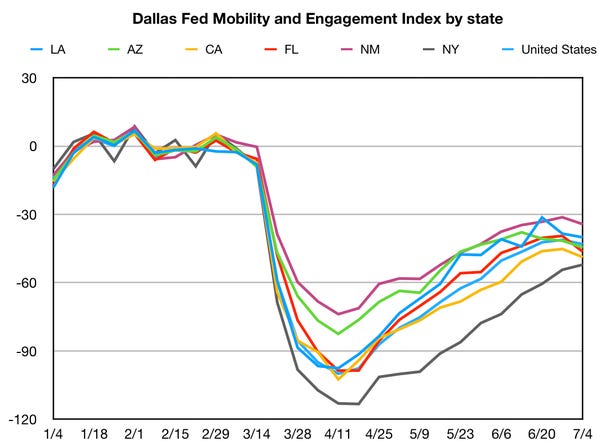 The Federal Reserve Bank of Dallas has a Mobility and Engagement Index that uses geolocation data to track how much people are social distancing amid the coronavirus pandemic. While the index is still trending up from its April low, in the last week that growth has slowed, and even ticked down in some states.

Read more: GOLDMAN SACHS: Wall Street is bracing for a historically wild stock market as the presidential election nears. Here’s a surprising yet simple strategy for protecting your portfolio — regardless of outcome. 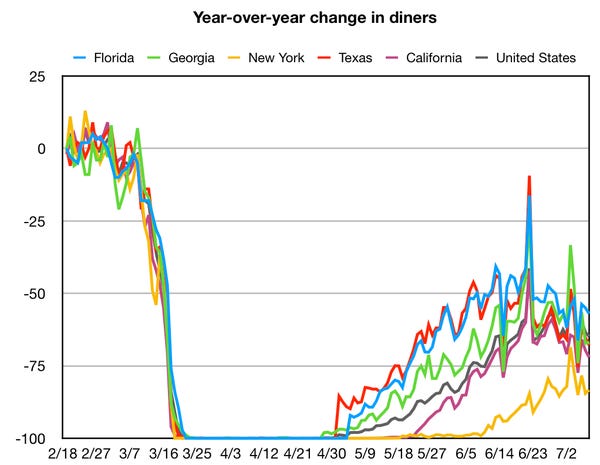 Data from OpenTable showed that people were venturing back out to restaurants a few weeks ago as the economy reopened. But in the last few weeks, reservation bookings on the platform have slipped, especially in states that have rolled back reopening plans, such as Texas, Florida, and Georgia.

OpenTable tracks seated diners from online, phone, and walk-in reservations in cities where it is present. The above data reflects only restaurants that have chosen to reopen in each given market.

3. There aren’t as many employees returning to work as last month. 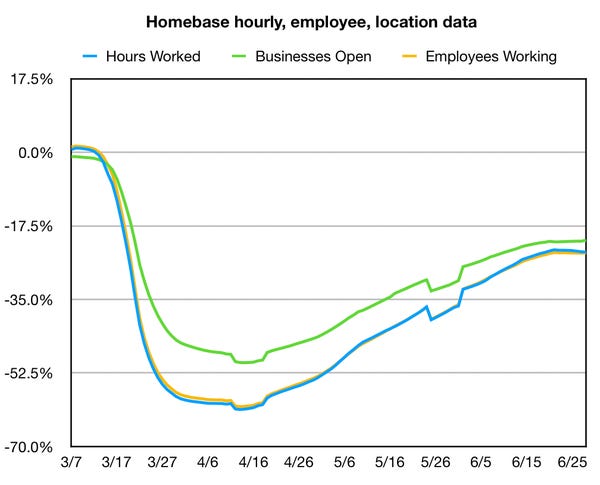 Homebase, a time scheduling and tracking software used mostly by small businesses, saw the number of hours worked plateau in the last week of June, which is likely to continue, according to data from the company.

The pace of improvement of businesses reopening and workers coming back in June slowed from a month earlier, according to Homebase’s monthly report. In May, the number of employees working improved 37%, while in June, gains were only 6%.

In addition, Homebase is seeing declines in growth in states with higher COVID-19 cases, such Arizona, Florida, and Texas.

Read more: Wall Street is being shaken to its core by a legion of Gen Z day traders. From a casual hobbyist to a 20-year-old running a 14,000-person platform, meet the new generation of retail investors.

4. States with high COVID-19 cases have seen a decline in the number of shifts worked. 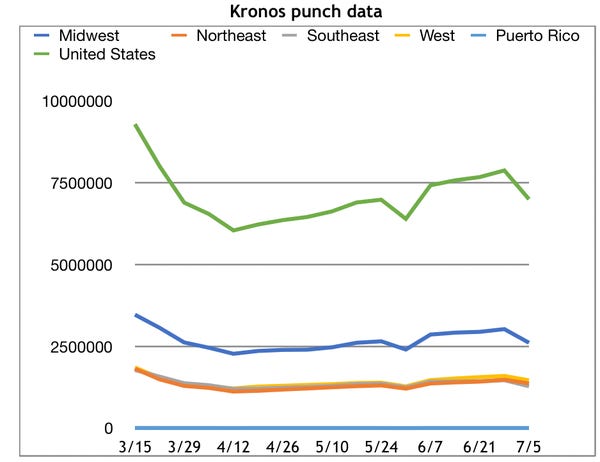 In the past week, 26 US states saw double-digit decreases in shifts worked, according to data from Kronos, another time-management service provider with roughly 30,000 clients across the country. In 11 of those states, the number of coronavirus cases exceeded 100 per 100,000 residents in the same timeframe, according to Kronos.

The states that have reversed reopening plans have seen dips in workers punching in as well. Workers clocking in declined nearly 9% in Arizona, 9.2% in California, 14.6% in Michigan, and 9.4% in Texas.

Some of the dip could be because of the holiday weekend early in July, according to Kronos.

“While the July 4 holiday expectedly impacted the US workforce over the past week, rising COVID-19 cases, particularly across the Midwest and Southeast, present a new challenge for businesses trying to reopen and stay open,” said Dave Gilbertson, vice president of strategy and operations at Kronos.

“Real-time workforce data over the coming month should reveal if the US is reaching a nationwide economic plateau as shift recovery and net-new hirings continue to slow,” he added.

Read more: A Wall Street expert breaks down how universal basic income would directly benefit 4 sectors of the stock market and squash wealth inequality — despite critics warning it would be a disaster

A Tesla Cybertruck was spotted…

Silicon Valley VCs are at…