The belief that housing prices never go down did not seem wild to many people until the Great Financial Crisis began in 2008.

These days, baby boomers are not the only ones driving seemingly sanguine narratives that may not end well. Millennials and Gen Xers are fully in on the action as well, having put faith in the forces that drove the longest bull market in history — one which they were able to participate in.

Spend any time on certain corners of Twitter or Reddit, and it will quickly become apparent that the idea that stocks only go up is more than a meme.

While stocks have historically delivered on that narrative over the long term, one Wall Street expert says the same mindset on a short-term basis is as toxic as the housing narrative was in the 2000s.

He added: “Professional equity strategists have now mostly jumped onto that bandwagon out of utter fatigue; they are just about universally bullish. The euphoria is here.”

Cecchini is drawing parallels between the widespread bullishness on stocks today and the sentiment that drove housing prices in the 2000s and tech stocks in the 1990s. Right now, it still pays handsomely to be in the uber-bullish camp. After all, the Dow Jones Industrial Average recently hit an all-time high and exceeded the 30,000 milestone for the first time.

However, Cecchini’s warning is that certain bullish narratives have holes in them — and these downsides won’t disappear just because they’re being ignored. He highlighted three in particular that may not end well.

The first is inflation, mainly driven by the belief that a Democratic-led government would juice the economy with fiscal stimulus. In response to this narrative, long-neglected value stocks began to massively outperform their more expensive counterparts with rapid earnings growth.

Cecchini recalls that inflation defied all economic logic when it stayed below the Fed’s target after the 2008 crisis despite years of monetary stimulus.

Additionally, he doubts that companies will be productive enough to raise wages, thereby constricting an important ingredient that is needed for the inflation Wall Street is betting on.

The reason for his skepticism — and the second narrative on his watchlist — is that corporate America’s debt binge will eventually become a drag.

By one indicator — the interest coverage ratio, which gauges how easily companies can pay interest on their outstanding debt — almost 600 of the 3,000 largest companies are in questionable territory below 1.

Cecchini notes that these same companies added almost $1 trillion in debt due to the pandemic, lifting their total obligations to $1.36 trillion according to Bloomberg data. And it’s not like profitability is improving either; non-financial corporate profits, already in decline before the pandemic, are still weakening. 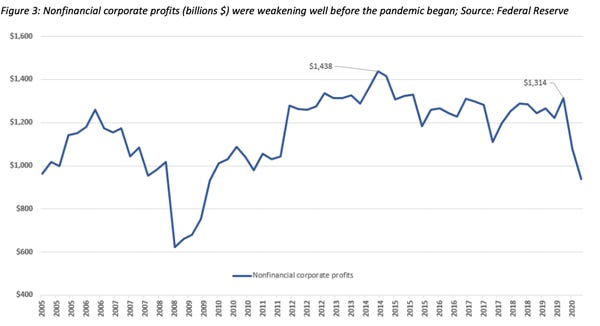 
The third and final narrative relates to a COVID-19 vaccine. Investors started cheering the possible end of the pandemic after candidates from Pfizer, Moderna, and others showed high efficacy in trials.

Cecchini is not convinced that a vaccine will end the pandemic as quickly as Wall Street wants. He cites Dr. Anthony Fauci, the US’s leading infectious-disease expert, who has said a vaccine could be available to all Americans by April. That timeline implies another five months of curtailed economic activity, in Cecchini’s view.

Even after the vaccine becomes available, a divided populace — including many people who don’t always trust the science — may delay widespread use.

For now, investors are largely focused on the upsides of these bullish narratives, much like they did before the 2000 and 2008 crises struck.

“The narratives that are now accepted as ‘rules’ about what will drive markets in 2021 can unravel in a heartbeat, BUT they can be self-fulfilling for much longer than is rational. Right now, just as in 1999 or 2007, it’s brutal fighting the bogus narrative, and it’s folly to be short,” Cecchini concludes.

South Africa says it is…

Woman went from being homeless…

The UK could face an…