There is no question that the stock market can remain irrational for longer than you can remain solvent.

This piece of market wisdom is often used to advice investors against fighting uptrends and selling out too quickly when conditions appear to be frothy.

But for Barry Bannister, the head of institutional equity strategy at Stifel, the least any investor can do is admit that the market is indeed irrational. He has done the math for them and identified a level on the S&P 500 that would confirm a bubble, based on his analysis of how expensive market environments resolved themselves over the last 100 years.

The good news is that we’re not there yet. However, Bannister’s cautious outlook comes at a time when chief strategists at other firms are releasing high expectations — and S&P 500 price targets — for 2021. Goldman Sachs is gearing up for a “roaring ’20s redux” per the title of the firm’s 2021 equities outlook note. And Jefferies in November forecast a 7% rally for the S&P 500 in 2021 before hiking its target within a month.

To be sure, Bannister is not expecting an imminent crash. His S&P 500 target of 3,800 represents a 4% increase from current levels — and he is open to revising it if the breakout in value stocks proves to be persistent.

He is flagging what may happen if and when the index exceeds his price target and rises to 3,900. His concern is anchored on the last 100 years of the cyclically adjusted price-to-earnings ratio, a valuation gauge that accounts for inflation and compares the S&P 500’s price to its ten-year average of earnings.

Based on these precedents, he says the market is approaching a “pivotal level” that would confirm a bubble if it keeps rising, or would mark the top if it falls. 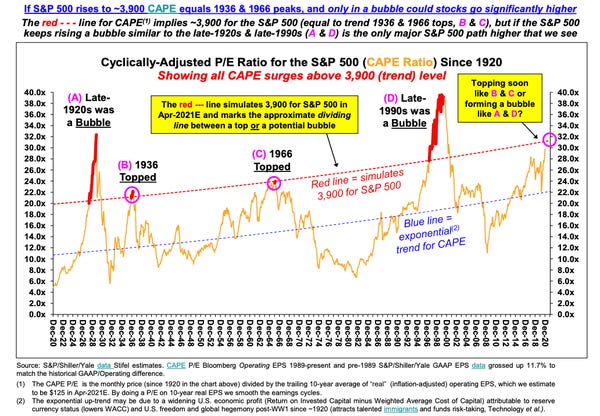 Bannister may not be the most bullish strategist out there — but that does not mean he ignores the catalysts that have supported US stocks this year despite the pandemic.

He even takes a step back to account for the market’s success over the past century: since the end of World War I, the US has enjoyed unparalleled freedom and global hegemony that has facilitated risk-taking and attracted talented immigrants. This fertile ground produced the world’s first trillion-dollar company and countless more profit-generating business empires.

These conditions won’t go away overnight, and stocks may command more surprising valuations.

Additionally, the creator of the CAPE ratio, Nobel-winning professor Robert Shiller, says valuations are not as irrational as his invention suggests. He concluded in a recent column for Project Syndicate that stocks continue to look attractive, particularly relative to bonds, because interest rates are so low.

That said, Bannister reminds readers that a high CAPE has historically signaled lower returns in the years that followed — and he is expecting the same during the 2020-2030 decade. The ratio is now at 33; the two other times it was above 30 were in the late 1920s and early 2000s, right before major market calamities.

The CEO who got Alexis…

Jeff Gundlach lays out a…

Bidens inauguration rehearsal has been…